Blockbuster, LLC., also known as Blockbuster Video and simply Blockbuster, was a popular American chain of movie and game rental stores. Operating in both the United States and Canada, the chain collaborated with Sega of America on a number of promotions, exclusive rentals, and even the ambitious Game Factory rewritable cartridge service. 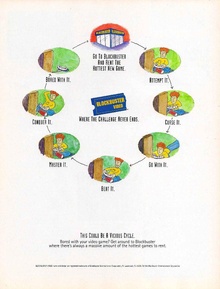 Game rentals were a relatively new service which quickly took off with American consumers.

One of the largest names on the home rental industry, Blockbuster capitalized on America's Nintendo Entertainment System boom by branching out into video game rentals. Strongly opposed by Nintendo (from a combination of their concern over lost profits, and coming from a country which outlawed game rentals), Sega took a different approach and instead worked closely with Blockbuster, collaborating on a number of video game promotions and relevant advertising throughout most of the 1990s.