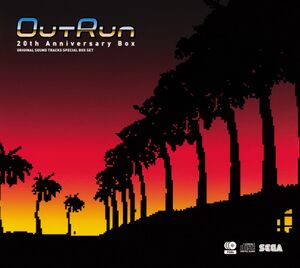 OutRun 20th Anniversary Box contains 11 discs of OutRun music tracks, spanning the entire history of the franchise up until 2007. There are 207 tracks in total, including 23 versions of "Magical Sound Shower".

Music is an integral part of a video game experience, and many of Sega's musical works have been given widespread critical acclaim over the years. Not wanting to miss an opportunity to make money, Sega have been releasing albums containing music from their video games since the late 1980s. Few video game albums ever leave Japan - when they do, they're often given away as pre-order or special edition bonuses, and soon become valuable collectors items.

Sega have worked in conjunction with a number of publishing labels, including their own, Wave Master. Their sound employees have also formed groups in the past, namely S.S.T. Band and B-univ, and have gone on to release albums of their own.

This category has the following 39 subcategories, out of 39 total.