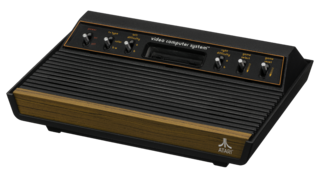 While not the first cartridge-based system to be produced, the 2600 is generally credited as being the first successful home video game console (with removable media, as opposed to the multitude of Pong consoles produced across the 1970s). This is particularly in North America, where it played a substantial role in the video game boom of late 1970s and early 1980s. 40 million dedicated 2600 consoles are believed to have been sold in total.

This category has only the following subcategory.

The following 14 pages are in this category, out of 14 total.