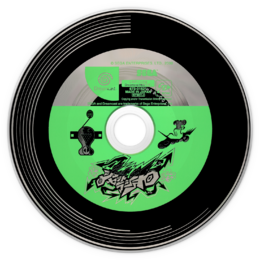 Jet Set Radio GD-ROM for the Dreamcast, one of many popular titles for the system.

As of November 2007, the Sega Dreamcast has 688 official games available in its library. There are also numerous homebrew games for the Dreamcast and games continue to be released by certain companies. Games were sold in jewel cases; jewel cases in Europe were twice as thick as their North American counterparts, possibly to have space for thick, multilingual instruction manuals.

Among the official games are Dreamcast online games that could be played over the Internet. The online servers were run by SegaNet, DreamArena, and GameSpy networks. Online game support was particularly popular in Japan, with releases of network compatible games such as Tech Romancer and Project Justice. Web browsers were developed by independent companies such as Planetweb to allow access to web sites and included features like Java, uploads, movies, and mouse support. Dreamarena came with games such as Sonic Adventure, and Chu Chu Rocket.

There are five games that can still be played online. Quake III Arena and Maximum Pool are still accessible via various servers. 4x4 Evolution and Starlancer are still online through Gamespy. SEGA Swirl can be also be played online with its play by e-mail game. Phantasy Star Online has private servers where people can use an action replay to bypass the online check and connect to the server.

This category has the following 43 subcategories, out of 43 total.