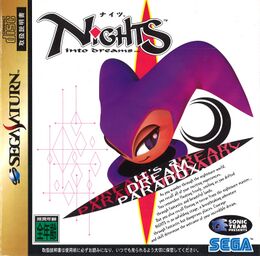 With no hard-hitting Sonic title to combat the likes of Super Mario 64, Sega often used NiGHTS into Dreams to draw people to the console.

The Sega Saturn is an oddball in Sega's console history, failing to secure a large market share in Western territories, but doing phenomenally well in Japan. Its success in Japan led to over 1000 Saturn games being released, most of which were exclusive to the Japanese market. It is estimated that more than half of the library was not released in Western regions.

The Saturn, PlayStation and Nintendo 64 were famous for revolutionary 3D software. However, the Saturn's awkward hardware setup meant that it didn't get as many 3D games as the PlayStation. Nevertheless, the Saturn is considered to be far superior than its rivals at 2D games, making it the console of choice for 2D shoot-'em-ups and RPGs - both successful genres in Japan. Like previous generations, Sega were able to harvest ports of their arcade releases, notably Sega Model 2 games. The Sega Titan Video arcade system is modelled on the Saturn, and it is common to see ports to both systems.

In Japan, a budget line of games were produced under the Satakore brand.

This category has the following 25 subcategories, out of 25 total.