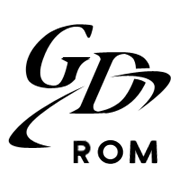 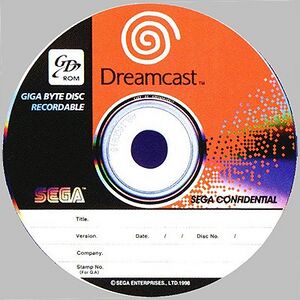 The GD-ROM (Gigabyte Disc Read Only Memory) is the optical media used by the Sega Dreamcast console (as opposed to a standard compact disc), as well as the Sega NAOMI, NAOMI 2, Triforce, and Chihiro arcade systems. GD-ROMs have the capability of holding a maximum of 1 GB of data, rather than the standard 650-700 MB of a CD.

Developed by Yamaha, the GD-ROM is a proprietary format which works by packing the pits on the disc closer together to store more data. Along with more storage, the GD-ROMs provide an extra level of copy protection as they cannot be reproduced using a standard CD-Writer.

Regions of a GD-ROM Disc

The are 3 distinct regions when you look at the data (reflective) side of a GD-ROM disc.

"Produced by or under license from SEGA Enterprises LTD"
"Trademark SEGA"

The details of the high-density region aren't really known, but most likely the pits are just packed tighter than normal but still within tolerance since there is no problem to get a standard CD-ROM to read data. Claims that SEGA dispensed with error correction as a way to increase the payload are not true. GDROMs use the same error correction as standard CDs but since data is packed tighter, scratches will affect more data and thus be more detrimental.