History of the Sega Pico

Back to: Sega Pico.

By the time of the early 1990s, electronic toys were on the rise, and Sega, a company at its peak decided to create a home console geared towards a younger audience. The result was the Sega Pico, a device derived from the popular Sega Mega Drive console. "Pico", like "Mega", is an SI prefix, in this case equating to 10−12.

At the time, there were virtually no rival products on the market, certainly none which had been shipped internationally, and it would take a great many years until Sega would face some serious competition (namely from VTech and LeapFrog). 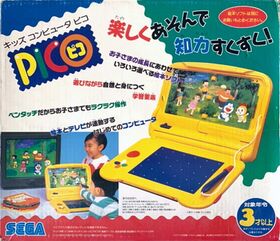 The colorful, child-friendly box of the Pico.

The Pico was initially released in Japan in June of 1993, and would receive continuous support for over a decade.

The Pico was initially manufactured solely under the Sega brand; however, its success led Yamaha releasing a few versions of its own (similar to Hitachi and Victor's respective HiSaturns and V-Saturn Sega Saturn consoles). Sega Toys took over the making of Pico models in 1998 and the brand was changed from "Kids Computer Pico" to "'Kids Communication Pico" in 2001, to reflect newer models' added internet functionalities.

It is estimated that nearly 300 Pico games were released in Japan in total. The console was eventually discontinued in Japan in 2005. All Japanese games come in plastic clamshell containers.

In North America, the Pico was less successful. Debuting in 1994, the console only enjoyed a few years of support before being discontinued in February of 1998. Only 20 Pico games were released in North America, each in cardboard boxes.

The Pico won critical acclaim amongst Toy and Edutainment companies in the US[1][2] and by 1996 the Pico had an installed base of 400,000 units[3], 225,000 machines being sold in 1995[4]. Like the Sega Mega Drive, the North American distribution rights were picked up by Majesco after the console's popularity began to dwindle, and in 1999, Majesco reissued Sega Pico systems at the reduced price of $49.95[5], $100 less than the previous asking price[6]. Supposedly the firm was meant to distribute more Japanese games in the region, though this never happened[5].

In North America, the concept of "deluxe storyware" was frequently stressed across advertising campaigns, but at present it is not understood how this software differs from their non-deluxe counterparts.

The Pico was released in Europe and enjoyed a similar run to the US model. All European cartridges are yellow, and (at least) English, French, German and Spanish variants of each game exist. Giochi Preziosi distributed the console in Italy, frequently opting for the sturdier plastic clamshell boxes found with Japanese games.

The console was delayed slightly due to a dispute with Sega and UK distributors Tomy, the latter feeling that the £150 price point was too high (at least, compared to the Sega Mega Drive, soon to be dropped in price to under the £100 mark)[7].

Little is known about the Pico's European endeavours - it is presumed to have fared worse than North America as slightly fewer games were released in the region, though sources state its lifespan was about the same (1994–1998). At least one game, Professor Pico and the Paintbox Puzzle, was exclusive to Europe.

Differences in language was a major hurdle for the Pico. Unlike other consoles where European software often came with language selection screens, the reliance on physical pages meant that every game had to be translated.

The console was released in Russia and CIS countries in 1996.

In Brazil, the Pico was distributed – as all Sega products of the time were – by Tec Toy. Games were translated to Portuguese and were usually based on their North American or European counterparts. Tec Toy is known to have translated at least one Japanese game too - Hello Kitty no Tanoshii Butoukai.

The Pico was also released in South Korea by Samsung. Performance in the region was surprisingly strong, with South Korean Picos receiving a large number of translated software (and accessories) from both North America and Japan. Samsung also produced a large array of Korean-specific software, and at least two versions of the console were known to be released in this region.

Pico models have also been spotted in the large and complex region for which Sega uses the single name "Asia".

Sega introduced Pico to Taiwan and Indonesia in late 1997 and expects to achieve total sales of 330,000 units in both countries by 2000. Sega expected Asian demand for Pico to be high because computer-related education began to spread.[8]

Pico was officially sold in Turkey by Aral.[9]

Despite being of Sega's most popular consoles, the Sega Pico is woefully under-documented. Its target audience (for the most part, Japanese children under 9) and subject matter means very little is understood about the system and it is not widely desired by fans of retro gaming.

Sega brought a handful of Pico games to the PC under the Paso Pico (ぱそピコ; abbreviating ぱそこん/パソコン, the Japanese equivalent of "PC", and Pico) label between 1998 and 2002.

In Japan, the Pico was followed by the Advanced Pico Beena, a similar but more powerful device. Elsewhere Sega strayed away from trying to please the market for young children, preferring to back projects by LeapFrog and other similar companies. There was a relatively strong relationship between Sega and LeapFrog at one point, with Sega Toys distributing LeapFrog products in Japan, and Sega producing games such as Sonic the Hedgehog for the LeapFrog Didj.