The R360 is a special arcade cabinet developed by Sega, released in Japan in 1990. Capable of rotating 360 degrees on two axis, the cabinet simulates in-game motion, while allowing its player to assume basic control of an adapted game and the moving pod itself. Originally designed exclusively for Japan and G-LOC: Air Battle, the R360's life was extended for a 1991 worldwide release and other games.[1]

Though ultimately an expensive commercial endeavour for Sega, the R360 has been retrospectively credited as a masterpiece of their arcade output by critics and gaming enthusiasts alike.[1] Due to the popularity of the concept, Sega has revisited the basic cabinet design for the newer Dennou Senki Virtual-On Special and Transformers Human Alliance Special in its Joypolis indoor theme parks. 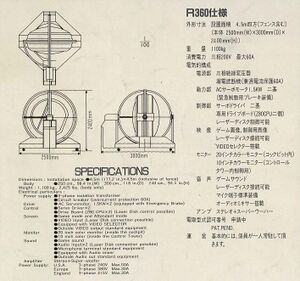 The R360 cabinet is best described as a gyroscopic motion simulator. Its complex nature means that numerous components are used on the inside and outside to ensure it performs its purpose correctly, however the most significant of these include its cockpit, wireframe, and control tower. These three parts contain the main bulk of the cabinet's hardware, either attached within or outside for the player or operator to use.

The main selling point of the R360 is, as its name may suggest, the ability to Rotate 360 degrees on any axis with a maximum of 2Gs. So in G-LOC's case, if the player causes the jet plane to perform a barrel roll, the cockpit will rotate to attempt to simulate this movement in the real world. Predictably, the immense weight of the cabinet and safety considerations means it does not respond well to quick movements.

The R360 is able to perform these movements on both the X and Y axis through its use of drive motors and slip rings. The former is made up of 1.5KW AC servo motors made by Toshiba, two for each axis. To do these safely, numerous safety requirements are employed; a series of sensors and an emergency button inside the cockpit stop motion, and a unique harness seatbelt design is used for added security.

Aside from its safety measures, the cockpit also contains a 20 inch CRT monitor, joystick, handbrake, and an original bucket seat design made of FRP and urethane, covered in grey PVC leather. In the case of Wing War being installed, an added throttle control and link equipment for battle with another R360 unit will be required, whereas with Rad Mobile, a redesigned control panel and rewired brake/gas pedals are needed.

Outside of the main cockpit and wireframe is an operator control tower, containing further safety controls, a 10 inch monitor displaying gameplay, microphone terminal, and the boards for the installed game. Further components include its stereo sound system, subwoofer, exterior cockpit lighting, and fence. In total, the R360 should normally make use of a 4.5m x 4.5m installation space, with the cabinet body itself weighing 1,100kg and measuring 250cm in width, 300cm depth, and 240cm height. Due to its hefty technological demands, the R360 also requires a 3-phase power supply; 240V in the USA, 380V in Japan, and 415V in the UK.