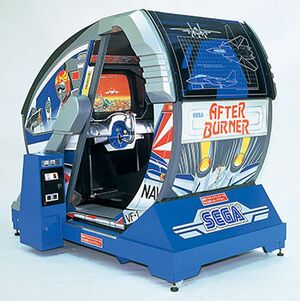 During the mid 1980s, Sega continued its established pattern of developing and releasing new coin-operated game concepts with revolutionary features, seen early on with the electro-mechanical Periscope's fresh use of quarters. Though its innovation had generally came from introducing new cabinet design aspects to heighten player enjoyment during the 1960s and 70s, the popularisation of video games allowed the company greater freedom in taking on and establishing concepts during the 80s.

This was seen most significantly in games like Hang-On, which received success and credibility as a result of the innovations in its then-nascent racing genre and graphical advances on previous releases. A secondary part of the success came from their design innovations, carrying through from Sega's older output. In the case of Hang-On in particular, the design of its full-size cabinet became the first full body experience arcade game, with players able to tilt the bike model left and right for controlling the game.

Sega and head Studio 128 developer Yu Suzuki noted its popularity, leading to games using seated pods powered by motion drivers such as Space Harrier and After Burner. These sustained popularity through their hydraulic motion dictated by the players controls, with the line soon becoming officially recognised under the Taikan and "Simulator Machine Series" names; the former roughly translating to "experience" or "bodily sensation".

The prominence of the taikan cabinet range led to influence and imitators in the amusement industry. The likes of Taito and Namco notably followed Sega's lead in special versions of titles like Metal Hawk and Chase H.Q., with the former notably building up to its application of ideas garnered from the taikan boom for a full-size theme park attraction, Galaxian 3. While Sega would eventually also create theme park projects in its 1990s amusement rivalry with these corporations, smaller companies also partook in creating taikan cabinets. In some cases, existing games were even bootlegged by some manufacturers for custom cabinets, in spite of their complexities. 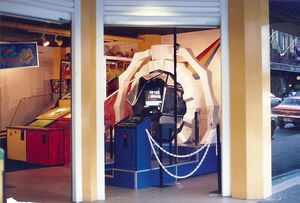 The beginnings of the R360 can be traced back to a bootlegged taikan cabinet of After Burner by an unknown manufacturer. The machine appeared on location test at an arcade in Perth, Australia, and word soon spread of its existence.[1] Upon learning of the situation, long-running Sega managing director Hisashi Suzuki instructed Masaki Matsuno and company newcomer Masao Yoshimoto to inspect the machine on a trip to Australia, aiming to base a new project off of it.[1]

When there, the two developers found out that the cabinet unusually used three axes of movement, X (horizontal), Y (vertical), and Z (depth).[1] Though the design interested them, testing of the cabinet revealed that its movement was slow and restrictive, as well as making use of insufficient safety measures; this motivated Sega to significantly better the design, thereby creating its next advancement in amusement equipment.[1]

Development began with the formation of a new development team, which would later become Sega AM4.[1] Led by Yoshimoto and Matsuno and consisting of a fresh workforce, the team conducted experiments in understanding motion by modifying and riding an unused large cable drum found on the roof of Sega's annex building.[1] Following this, inspiration was taken from earlier gyroscope devices, such as the 1960s "Aerotron".[2] The decision was made to use two axis of movement, X and Y, and the first R360 prototype was produced using a motor attached to a steel pipe frame of 100mm length, 50mm width, and 2.3mm thickness.[1] The complexity of this was unprecedented; Yoshimoto has stated that difficulties were faced in ensuring cracks would not quickly form in the frame.[1] 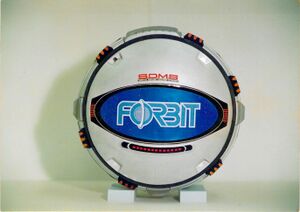 Yoshimoto overcame the challenge of providing electronic signals to early cockpit designs by making use of slip rings and drive motors.[1] Though expensive, these ensured that power, video, and X/Y axis controls were sent efficiently, although due to the quality of CRT monitors, some color unevenness would occur from the motion.[1] As the cabinet's design began to take shape, mock-up models were made to illustrate its appearance, as well as further prototypes assembled at Sega's Yaguchi arcade manufacturing offices.[1]

After an incident in which a developer was stuck upside down for a prolonged period of time, an increased push for safety began, with a unique harness design, control tower, and a series of sensors added.[1] New Sega R&D 8 release G-LOC: Air Battle was chosen to be adapted as its game, and with it, the R360 made its public debut, with a near-complete prototype first appearing in a highly-publicised press event held by Sega at Haneda Tokyu Hotel, Shibuya, on July 3, 1990.[1][3][4][5] 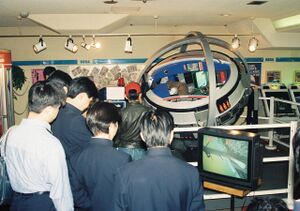 After an initial location test at Hi-Tech Land Sega Shibuya, the R360 was manufactured by Sega in limited numbers for Japan and given a wider release.[1] It subsequently appeared exclusively in other amusement facilities directly managed by the company, including Sega World Tokyo Roof and O2 Park Sega World; the first two units outside of these were sold to the operators of the Carnival game center located in the former Big Egg City, Tokyo, during December 1990.[6]

Following this, it made further appearances at locations both affiliated and unaffiliated with Sega in Japan, and briefly became a part of the En-Joint concept alongside other early mid-size attractions such as Cyber Dome, where it was classed officially under the "Hi-Entertainment Game Series" moniker.[7] True to its brief status as a ride instead of a video game machine, Sega intended to release laser disc ride films for the cabinet soon after its release, though these would never materialise.

In part due to its release outside of Sega locations in 1991, consumer interest was sustained in the R360. Sega responded by briefly toying with an adapted version of Rad Mobile for the cabinet.[1] This made a select few appearances in Japan at AOU Show 1991 and Hi-Tech Land Sega Shibuya before disappearing without a wider release;[8] it is suspected that it failed its location test stage. The system's high cost (estimated at ¥18,000,000[1]) and operational burden reportedly displeased buyers, yet in spite of this, foreign demand from overseas operators was such that Sega decided to allocate R360 units for a worldwide release in 1991.[2] 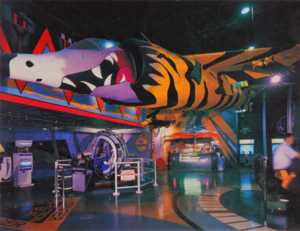 After appearances in late 1990 editions of Sega Visions, a showcase at ATEI 1991 and a segment on UK TV show Tomorrow's World during January,[9] early adopters included the Funland amusement arcade in the London Trocadero.[2] Further R360s were shipped out to western territories with the advent of Sega expanding their amusement operations; notable examples included twin setups at Sega VirtuaLand and Sega World Bournemouth. New setups would continue to appear as late as 1996 for SegaWorld London.[10]

Before support of the R360 was terminated by Sega, a final update allowing Wing War to be played by two duelling units was released in 1994.[1] Unlike the Rad Mobile version, this would ultimately appear mostly outside of Japan, although numbers were similarly limited.[1] Rumours also circulate which state that After Burner II and Strike Fighter may have been adjusted for use with the R360 in the latter part of its life, however these have never been verified.[11]

Most R360 units were no longer operational by the early 2000s due to removals, maintenance issues, and the closures of their venues, with few surviving into the following decades.

Though a commercial failure for Sega, the R360 was widely praised upon release for its technological and entertainment prowess, and has retrospectively came to be recognised as one of the company's creative high points.[2] It has been described as the "ultimate experience machine",[1] and can in some respects be seen among the peaks of Sega's arcade cabinet design efforts. The "taikan" series of games ended soon after the R360's release, and Masao Yoshimoto has stated that though he was proud of his work in developing the machine, he eventually felt despondency from a belief that he had nothing left to create.[1]

In rare cases, the R360 has encouraged future Sega developers to create similar advanced works. Seminal producer Tetsuya Mizuguchi credits his impression after an encounter with the machine as one of the main reasons for his 1990 job application to the company.[12][13]

The R360's design has inspired numerous imitators. It has also been revisited by Sega twice for its special Joypolis theme park attractions, first in 1998 for Dennou Senki Virtual-On Special, and again in 2015 for Transformers Human Alliance Special.[2] The cabinet was one of many references to the company's past in Segagaga, where a space shuttle device resembling it in the final shoot 'em up portions of the game is named the "R720". In 2005, the R720 parts of Segagaga were also compiled into a singular scaled-down mobile game, Segagaga R-720.

In 1993, the R360 was notably used in medical research by the National Hospital for Neurology and Neurosurgery in London to help understand brain disorders affecting balance and coordination.[14][15] 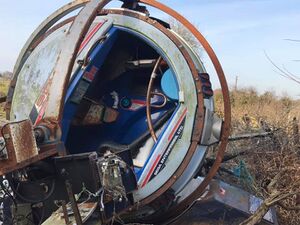 Culminative estimates of the amount of R360s manufactured by Sega differ between sources. It has been claimed between 100 and 200 were made,[2] and official counts have varied, with one internal source purporting that the true number is a "company secret".[16] It is, however, widely presumed that the large majority of these have been disposed of or broken irreparably; a notable example being a rediscovered unit abandoned in a Northern Ireland field.[17][18][19] ROMs for the R360 versions of G-LOC and Wing War have been dumped and are playable in MAME.

Due to the popularity of the R360, interest in fan preservation has been sustained over time, and a small number of working installations have made their way into the hands of private collectors and newer public venues. In North America, the G-LOC: Air Battle version can currently be played at Galloping Ghost Arcade, Brookfield, Illinois;[20] several units also remain with collectors, including publicised examples owned by Kevin Keinert and Craig Walker.[1] Other public R360s can be found in operation at two museum locations in Estonia.[21] Noted Sega collaborator and fan Michael Jackson is also known to have owned a cabinet.[22]

Despite reportedly wanting to, Sega themselves do not officially hold an R360, and none are known to be sited in Japan.[1]