Back to: Sega Mega-CD. 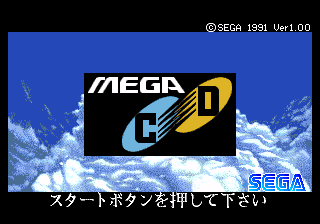 All variants of the Sega Mega-CD come pre-installed with a boot ROM - a menu interface which appears when the console is given power. While a Sega Mega Drive cartridge can boot almost instantaneously, CD-ROMs require verification and loading, which depending on the quality of the disc or drive, can take several seconds. In addition to help drive the CD-ROM, the Mega-CD's boot ROM informs the user that console is in Mega-CD mode, and cruically gives them something more interesting to look at than a blank screen.

Over time, many slightly different boot ROMs were developed by Sega (or its partners), either for localisation purposes, bug fixes or due to changes in hardware. The Wondermega for example has a different style of boot ROM to a standard Mega-CD, while the LaserActive has to accommodate the Mega LD format.

Most Mega-CD boot ROMs offer the same functionality - principly to run Mega-CD games. Most models can also play music CDs and Japanese models accept CD+G discs. As the Mega-CD also contains on-board memory for save games, the boot ROM allows users to manage data, either by removing save data they no longer need, or by transferring it to a CD BackUp RAM Cart. Later boot ROMs and the LaserActive cull some of these features, possibly as a cost-saving measure or limitations with the hardware.

On the Mega-CD, boot ROMs typically play a music track, while colourful Mega-CD and/or Sega logos dance around, demonstrating the system's rotation and scaling abilities. Boot ROM versions 2.00 and later support use of the Sega Mouse in control port 2, should users what to use that device to navigate the menus.

All of these features (and more) were also made available in the Sega Saturn and Sega Dreamcast, as well as most rival disc-based consoles.