While Shutokou Battle's roots date back to 1994 with the release of Drift King Shutokou Battle '94 on the Super Famicom, Western localisation has been sporadic and inconsistent. Tokyo Xtreme Racer was the second Shutokou Battle game to be released outside of Japan, following Tokyo Highway Battle on the PlayStation, released in 1996. Being a launch title for the Dreamcast, this is likely the most well known entry in the franchise. 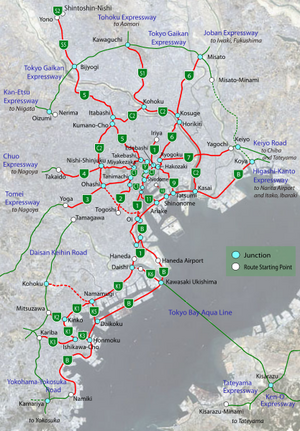 The Shuto Highway, the game is almost a perfect representation of the C2 line

The game is also one of the first mission based driving games. The player challenges other drivers on the Shuto Expressway in order to gain money to modify and enhance his or her car. The game features a wide variety of Japanese cars and tuning parts to purchase as the player progresses through rivals.

The game is based on illegal highway racing in Tokyo's Wangan highway with custom tuned cars. A such phenomenon is growing popular in Japan since the 90's with its dedicated manga (Shutokō Battle's biggest inspiration being Wangan Midnight), anime series and video games (C1 Circuit, Wangan Trial, Naniwa Wangan Battle).

The objective is to race every gang member on the Wangan Tokio Highway and become to top highway racer. To do this, the player starts with a Low-performance entry car and he has to challenge gang members while on a free run session on the highway. The player doesn't have an option to challenge rivals on the menu, instead, he has to be on the Highway and find a rival for itself. When a rival takes his challenge, 2 lifebars appear in the upper part of the screen, these lifebars decrease when a player is in the back (Second). If the lifebar is out, that player loses. No matter if the player won or lose, it wins money to buy parts and upgrade the car, also when winning, the gang member is recorded in a "encyclopedia" where every gang member is listed with personal info.

The unlock-upgrade system is also very basic, the player has some customization options divided in Visual and Performance. Visual upgrades let the player customize the look of his car, from bumpers to color or spoilers. The Performance part lets the player upgrade his engine, brakes, or suspension. To win these upgrades the player just has to win races in a day: A day is when you enter the Free Run mode, and then going back to the garage where all the options are, if the player decides to go back to the Free run, it will be the next day.

Since it's introduction in the mid '90s, like similar games, the Shutokou Battle series never used licensed cars but the usual type designation such as "TYPE-86" and later "TYPE-AE86L3". Nicknames were used instead in the "Wangan Dead Heat" sidestory (e.g. "Rapid Fire" for the "Nissan Skyline GT-R R33"). These "types" are actually the real chassis code used by the Japanese makers to designate the various grades of a lineup. As the graphics quality was improving with each release, from 16-bit 2D to 3D/CG 128-bit, the featured cars were becoming more and more similar to the actual cars appearance. In a similar way, the chassis codes became longer and more precise, allowing the player to determine each grade and to use the "rename car" feature. Inevitably, the game becoming a solid best seller, the Japanese makers forced Genki to buy the license of their cars. The very first Genki licensed game was Wangan Midnight for PlayStation 2 (28.03.2002), while the first licensed "Shutokō Battle" was Shutokō Battle Online released on PC, the 9th of January 2003. Since then, every Genki racing game uses licensed makers, and ingame cars with Honda chassis codes don't appear anymore in the Shutokō Battle games (However, Honda is licensed in the Kaido Battle series).

In the western release of the Dreamcast game, Banshee's controversial forehead tattooed Hindu swastika was removed.

Shutokou Battle became one of the top selling Dreamcast titles after its Japanese launch. As a reservation privilege of this game, Japanese die-cast modelscompany, Tomica, released a limited edition of Banshee's NSX in 1999.