Ultimate Mortal Kombat 3 is an update to Mortal Kombat 3, adding extra characters and stages as well as tweaking some of the gameplay. As well as appearing in the arcades, it was brought first to the Sega Saturn and then to the Sega Mega Drive and the Super Nintendo Entertainment System. More recently it has been re-released for the Nintendo DS and Xbox Live Arcade.

Building on Mortal Kombat 3, Ultimate Mortal Kombat 3 features the whole cast of its non-Ultimate counterpart (although on the Mega Drive, Sheeva is cut), and re-introduces some characters from Mortal Kombat II.

Using the prior MK3 port as a base, the Mega Drive version takes a hit in terms of graphical quality, but still provides extras not seen in the arcade original. Like the SNES port, Rain and Noob Saibot are made playable characters along with bosses Motaro and Shao Kahn. Mileena, Ermac and Classic Sub-Zero are playable without any need of codes. Shang Tsung can morph into Robot Smoke, Noob Saibot, and Rain, which is not possible in the arcades.

Brutalities are also included in this version. Nightwolf has his Red shadow shoulder move from Mortal Kombat Trilogy and this version contained a rendition of Pong entitled "MK4".

Animalities and Mercies were removed, reducing the number of finishing moves. (however, Kabal still has his animality combination coded and if executed, it causes lots of random glitches.) Shao Kahn's treasure chest has only 10 boxes instead of 12, and the announcer no longer says the characters' names. Most of the levels seen in Mortal Kombat 3 are missing, including The Balcony and The Street, so uppercutting in the Subway and Soul Chamber does not take the player to the level above. Although the Bell Tower has been removed, the Stage Fatality is still in the code and executable.

Another leftover from MK3 that wasn't totally deleted was code data for the 'Endurance Mode', which is still accessible through a Game Genie code. Sheeva has been removed, although her sound clips are still available in the sound test. Sonya's Friendship from Mortal Kombat 3 is used, as opposed to her Friendship from the arcade version of UMK3.

Scorpion's "Flaming Hand" Fatality is different too: he takes the opponent back to the Scorpion's Lair stage, where they just catch on fire and explode. Kitana's Kiss of Death only inflates heads with the same effect as Kabal's "Air Pump" Fatality. Rain and Noob were given a Brutality, but no other finishing moves. Human Smoke shares Scorpion's combos, rather than having unique ones and in Stryker's friendship, the running characters are replaced by dogs.

On the Mega Drive, Ultimate Mortal Kombat 3 is generally seen as closer to the original arcade game than its Super NES counterpart when it comes to gameplay and content. The Super NES has the advantage of higher quality audio and more colourful (if lower resolution) graphics, though some stages lack parallax scrolling, or are omitted from the game due to cartridge space or time restraints.

Curiously, the Saturn version is less accurate, being closer to Mortal Kombat 3 in design, dropping many Ultimate features.

The Bank level that was present in MK3 but was missing from the arcade UMK3 returns. Shang Tsung was given a morph for the Robot Smoke, which was not possible in the arcades. The secret characters can be unlocked via a secret options screen, eliminating the need to enter three separate Kombat Kodes to unlock them, which is useful as there is no save system. The Kombat Kodes (to unlock the secret characters) were shortened to have six slots instead of ten (probably in order to allow it to be performed with only one controller), but this method is still slower than entering one code to access the secret options screen.

There are a few new Kombat Kodes, but several that were present in the arcade release no longer work in the Saturn version. Noob Saibot is a shadow Kano as in MK3, not a black ninja as in the arcade version of UMK3. Since the arcade intro is missing, Rain does not appear in the game, yet the message Kombat Kode "Rain can be found in the Graveyard" can still be displayed.

Loading times cause the "Supreme Demonstration" mode to take almost 30 minutes to complete.

A Japanese Saturn version was planned, but cancelled. This version was set to be published by SoftBank[9].

As with previous games in the series, Ultimate Mortal Kombat 3 was banned in Germany on launch. The ban would not be overturned until 2005. 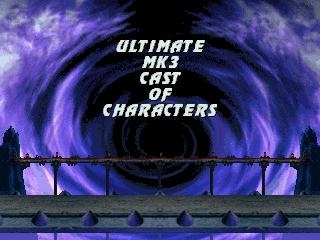