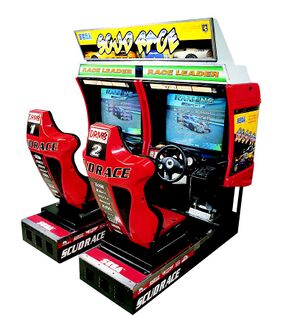 In 1996, Scud Race led the way in terms of 3D computer graphics.

Following the pioneering efforts of the Sega System series in two dimensions, the Sega Model series led the way in 3D video game technology during most of the 1990s. It was a time of great change - arcades across the world were decreasing in popularity thanks to the introduction of ever more sophisticated home consoles, and arcade machines were forced to work hard to attract customers.

Sega released a number of influential arcade games during this period, starting with Virtua Racing in 1992 and being followed by the likes of Virtua Fighter, Daytona USA and Sega Rally Championship. Many popular franchises began on these arcade systems, including Cyber Troopers Virtual-On, The House of the Dead, Fighting Vipers and Virtua Cop. Towards the end, the focus shifted from cutting-edge visuals onto unique control schemes impossible to recreate in the home.

Also released during this period was the Sega Titan Video board, allowing for Sega Saturn games to be converted for arcade use.

The following 4 pages are in this category, out of 4 total.