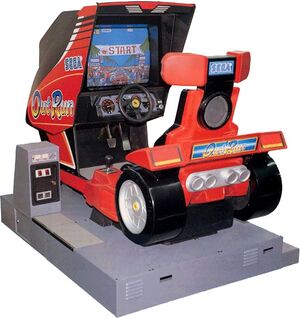 1986's OutRun was revolutionary at the time of release.

The Sega System series stands as the first set of "consistent" arcade boards used at Sega, following an experimental period in the late 1970s and early 1980s. Aside from the naming convention adopted by Sega, the defining piece of architecture which links these boards together is the existence of an 8-bit Zilog Z80 chip. Earlier boards use this for the CPU, later ones demote it to handling sound. Sega System hardware primarily spans a period from 1983 to 1992, when it was succeeded by the Sega Model series.

This category has the following 15 subcategories, out of 15 total.

The following 18 pages are in this category, out of 18 total.