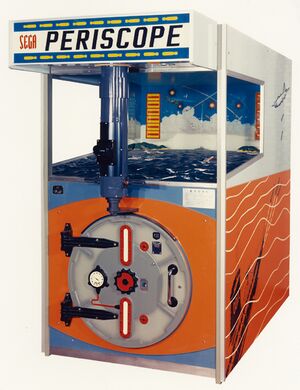 Periscope, an example of an early Sega electro-mechanical arcade game.

In the mid-20th century, electro-mechanical arcade games (EM games) were a staple of amusement arcade venues across the world. As the name suggests, these are commercial products, typically using simple electric circuits to move physical objects in order to simulate a game - an evolution of slot machines, pinball tables and Pachinko machines (as well as purely mechanical games), and which rose to prominence after the end of World War II.

Numerous amusement companies designed and manufactured coin-operated EM games between the early 1950s and late 1970s. Sega began producing games in the early 1960s, with the 1966 release of Periscope emerging as their first successful EM venture. Until the mid-1970s, the company structured itself around this market.

In the late 1960s, "video projection" electro-mechanical games began appearing, with the likes of Sega's Duck Hunt (1968) dropping physical moving targets in favour of projected animated images, helping to set the tone for the first half of the 1970s. With the advent of more complex and reliable "video games" - those which use a combination of solid-state electronics to draw a picture on a television screen, Sega became less focused[1] on its EM operations, ending with the release of Plinker's Canyon in 1976.

This category has the following 14 subcategories, out of 14 total.

The following 65 pages are in this category, out of 65 total.