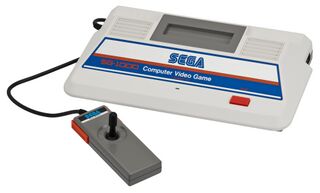 The SG-1000 (Sega Game 1000), known in New Zealand as the Sega 1000, is a home video game console produced by Sega. It stands as Sega's first dedicated gaming system aimed at home consumers, and is a cost-reduced counterpart to its SC-3000 computer, released on the same day on 15 July 1983.

The SG-1000 was only sold in select markets in Asia and Oceania, with an estimated 2 million units sold worldwide[1]. While the console fared better than many of its rivals, its main market in Japan would be dominated by Nintendo's Famicom system. It was successful enough, however, to convince Sega to continue to develop video games for the home, something it continues to do to this day.

Sega would refine the design with the release of the SG-1000 II the following year, and would release its first substantial upgrade, the Sega Mark III (released worldwide as the Sega Master System) in 1985.

This category has the following 6 subcategories, out of 6 total.

The following 9 pages are in this category, out of 9 total.