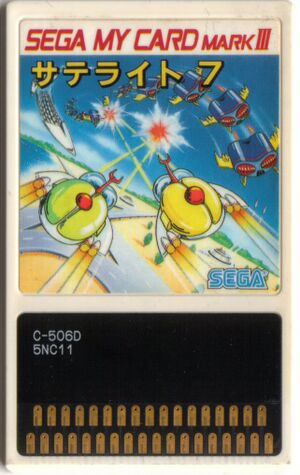 Satellite 7 was distributed exclusively in Japan on Sega Card.

The Sega Card or Sega My Card media format was an alternative to cartridges, designed by Sega and manufactured by Mitsubishi for use with the SG-1000, Sega Mark III and Sega Master System. The latter two used cards with the name Sega My Card Mark III in Japan, to differentiate them from those designed for SG-1000 hardware.

Sega Cards were typically cheaper to produce, but have a limited storage capacity of 32KB. The idea at the time was to distribute bigger games on cartridge to be sold at a higher price, while smaller games would be distributed on card at a reduced price. Sega backed both formats during the 1980s, but phased out the Sega Card format in 1989 due to limited popularity with consumers. It was also considered a health risk, with younger children trying to eat them[1].

Unlike Master System cartridges which are of a completely different shape in non-Asian regions, both Western and Asian Sega Cards are physically identical. However, as Asian SG-1000 and Mark III games generally lack a ROM header (which the bios of Western systems require) Asian Sega Cards are not compatible with Western Master Systems. Systems without a card reader (the original SG-1000, SC-3000, and redesigned Sega Master System II) can use the Card Catcher to run card-based games. The Power Base Converter was the last piece of hardware to contain a card slot, however, as the Sega Mega Drive cannot run SG-1000 games, the slot is restricted solely to Mark III/Master System cards.

The Sega AI Computer also ran Sega cards, though they were incompatible with other systems.