Battle Mania Daiginjou (バトルマニア大吟醸), sometimes referred to as Battle Mania 2, is a shoot-'em-up developed and published by VIC Tokai in 1993 for the Sega Mega Drive exclusively in Japan and South Korea. It is the sequel to Battle Mania (which was released in the US as Trouble Shooter).

The ROM header's international title field calls the game Trouble Shooter Vintage, which is another name commonly used for the game. This may have been the intended name had the game been released overseas. "Vintage" has a similar meaning for wine as "daiginjou" does for sake. 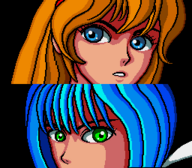 The game is a side-scrolling shooter like its predecessor. Mania and Maria fly using jetpacks. The player controls Mania and can move her in any direction using the D-Pad. She shoots her primary weapon with

, which can be held for rapid-fire. Maria follows Mania and fires when she fires. Maria's weapon starts fairly strong but cannot be upgraded, whereas Mania's weapon is initially comparatively weak but can be upgraded by finding power-up items. Both characters can neutralize enemy projectiles with their own.

There are three control schemes, which can be chosen in the Options before starting the game. The 1-way control scheme is the same as the original game. Mania always faces to the right, but Maria can face either direction and flips around with

also, so that Mania and Maria always face the same direction. This gives them stronger fire in both directions but only lets them cover one side at a time. Finally, the 8-way control scheme allows Mania to fire in eight directions (the four cardinal directions and the four intermediate directions). She aims by pointing the D-Pad in any direction while she is not firing. Her aim is fixed as long as she is firing. Maria still shoots only horizontally and flips around with

Before the first seven stages, the player is given a choice of power booster. This is a drone that follows the pair and provides a Super Weapon. After collecting two Power Up items, the drone also provides additional support fire. The drone usually follows Mania and Maria closely, but its behavior can be changed in the Options to revolve around the pair or fly in the opposite direction as them.

Super Weapons are powerful special abilities that can be used with

when the player's charge bar is full. The bar charges automatically; it charges quickly, so Super Weapons can be used multiple times per stage. If the player presses

before the charge bar is ready, it resets.

Maria is invulnerable, but if Mania dies once, the game is over and the player must use a continue. There is no way to earn additional continues. Mania dies if she loses all of her health points or gets crushed between a fixed object and the screen as it scrolls. Mania gains an extra health point every 20,000 points earned and by finding heart items. There is no limit to the number of health points that she can gain.

The game's story is conveyed through cutscenes before and after stages. The dialogue often gives hints about the upcoming stage. Like the original game, the tone is lighthearted and includes self-referential humor.

The game has a Score Attack mode that offers the player additional challenges to complete.

Translation group M.I.J.E.T. translated the game's dialogue text to English and included it with their Tougi Ou King Colossus patch as an extra before releasing it separately later.