Bimini Run is a third-person shoot-'em-up game released exclusively for the Sega Mega Drive. It was only released in North America. The title refers to an island chain in the Bahamas within the supposed Bermuda Triangle.

Kim O'Hara, the sister of expert motorboat driver and secret agent Kenji, is kidnapped. The kidnapping is immediately traced to Dr. Orca, who has hired other boat drivers and helicopter pilots to protect his island laboratory and fortress, where he plans on unleashing a super weapon called the Behavior Altering Module on the entire world. Kenji and his partner Luka arm themselves on a power boat, called the Banshee, and prepare to rescue Kim and save the world. 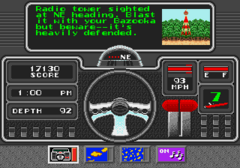 The game is a shooter where the player pilots a speedboat from a third-person 3D perspective. Rather than following a set path, the player can freely move around an area. The boat is steered with

. The player can shoot a low gun with

(for nautical targets) or a high gun with

(for aerial targets). Both shots can be held for continuous fire. The player can also fire a bazooka with

, which is a more powerful shot useful for destroying objectives. The bazooka can be fired higher by holding the button before releasing. Weapons are always fired forwards and aimed by steering the boat.

Gameplay consists of moving around the map (usually an archipelago), completing objectives, and shooting enemies who stand in the way. Typical objectives include reaching and destroying certain structures on the islands or pursuing something to a destination. New objectives are received in the form of radio messages, which are notified by a "Kenji, come in" voice sample. The player can view the last radio message in the pause menu with  START . This menu also contains a map of the area showing nearby enemies as well as a broader radar map with current targets marked on it. The boat has an instrument panel that includes a compass that indicates the direction of travel, a fuel gauge, and a depth indicator. The fuel level essentially acts as a timer; fuel is replenished at the beginning of each mission. The player must also beware shallow water near coastlines.

The player loses a life by colliding with an object, being struck by enemy fire or a sea monster, or running aground in shallow water. The boat is revived at the same point in the mission as it was destroyed as long as the player has lives remaining. The player is given an extra life after completing each mission. If the player runs out of lives, the game ends. Running out of fuel or failing a mission objective, such as letting a pursuit target escape or destroying a target containing Kim, can also cause the game to end, regardless of the number of lives remaining. The game can be continued if there are continues remaining.

There is a two-player mode where player one controls Kenji, who moves the boat, and player two controls Luka, who fires the weapons. In this mode, player two can aim Luka's weapon with