Capcom Co., Ltd. (株式会社カプコン) is a Japanese developer and publisher of video games, known for its multi-million-selling franchises such as Resident Evil, Street Fighter, and Mega Man.

Apart from its own arcade boards, Capcom also distributed its own System 32, Sega Titan Video, Sega NAOMI, and Sega NAOMI GD-ROM boards and games; all such are listed below. 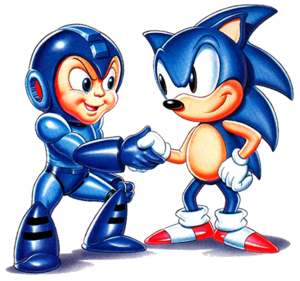 Capcom becoming a third-party Mega Drive developer was a significant accomplishment for Sega, and was announced with a now-famous image of Mega Man and Sonic the Hedgehog shaking hands in agreement.

Originally established in 1983, it has since become an international enterprise with branches and subsidiaries in North America, Europe, and East Asia.

While Capcom's first product was the coin-operated Little League from July 1983, its first real video game, the arcade title Vulgus, was released in May 1984.

Beginning with a Nintendo Entertainment System port of 1942 published in December 1985, the company started to venture into the market of home console video games, which became its main business segment a few years later. Since then, Capcom has created over 15 multi-million-selling game series, the most successful of which is Resident Evil.