Curse (カース) is a 1989 Sega Mega Drive shoot-'em-up, among the first on the system, released by Micronet exclusively in Japan.

The game has been criticized for its choppy scrolling and low frame rate.

The story takes place in an alien solar system and focuses on the history of its two inhabited planets: Barcelia (バルセリア) and Seneca (セネカ). For many years, the people of these planets lived in harmony together with the seemingly more advanced Barcelians continually visiting the Senecans. However, something happened on Barcelia: something caused the Barcelians to shut off all forms of communication, visitation and activity with Seneca. Over time, Barcelia's environment died out, leaving only a planet-wide barren terrain. Hundreds of years have now passed and the current generation of Senecans see Barcelia as nothing but a dead husk with the concept of life and companionship on it being mere, long forgotten legends.

One day, an enormous attack force flies from Barcelia and attacks Seneca without warning. Confirmed to be the Barcelian Military, the invaders cripple Seneca's defense forces. Besides being well armed and equipped, the Barcelia Military is also able to manipulate the wildlife to do its bidding through unknown means, ensuring no possible escape to safety. The desperate people of Seneca eventually discovered an ancient star fighter abandoned by the Barcelians called the Baldanders (バルトアンデルス). Using its technology, the people of Seneca use the Baldanders in a counter-attack against the Barcelian invasion to destroy their main battleship: a large, mysterious warship known only as Mother (マザー).

The game is a horizontally scrolling shoot-'em-up. The object of the game is to shoot all other enemies that appear on screen and avoid crashing into bullets, enemies or foreground scenery. The Baldanders starfighter moves in any direction using the D-Pad. It shoots its weapon with

, which can be held for rapid-fire. The Baldanders also has a screen-clearing bomb that it can deploy with

. The standard weapon can be changed by collecting power-ups. Collecting the power-up for the currently equipped weapon three times in a row upgrades the weapon and also gives the player another bomb. The player can also collect power-ups that add homing missiles to the standard weapon fire.

. They always fire away from the Baldanders, so rotating them also changes their direction of fire. The options are invulnerable, so they can be used to shield the ship from enemy fire.

The Baldanders is equipped with a shield that can take multiple hits from enemy fire before it is destroyed. However, the ship is destroyed by colliding with objects such as terrain or asteroids, regardless of the shield strength remaining. The Baldanders revives in place after it is destroyed (as long as the player has extra lives remaining), except on the final stage, where the player must start the stage over from the beginning. Extra lives are awarded every one million points earned. There are no continues, so the game ends if the player runs out of lives.

Curse was set to be released in North America by INTV Corporation, which had broken away from Mattel following the North American video game crash, and held the rights to the earlier Intellivision console. The game was one of the first non-Intellivision projects to be undertaken by the company (NES and Game Boy projects were also in development) and was announced in 1990. Despite being advertised, dated (for June 1990[3]) and even reviewed, the North American version did not materialise, probably due to the poor quality of the original Japanese release. 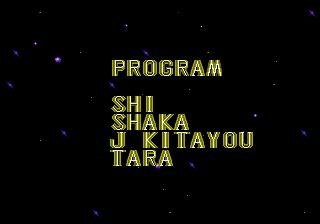