Mighty Morphin Power Rangers for the Sega Mega-CD is a full-motion video game developed by Orion Technologies and published by Sega in 1995. It was released exclusively for the Mega-CD, and it is based on the TV series of the same name.

A Sega Mega-CD 32X version was reportedly planned but scrapped.

On an exploratory mission, two astronauts discover an extraterrestrial container and inadvertently releasing the evil alien sorceress Rita Repulsa from 10,000 years of confinement. Upon her release, she and her army of evil space aliens set their sights on conquering the nearest planet, Earth.

The wise sage Zordon, who was responsible for capturing Rita, becomes aware of her release and orders his robotic assistant Alpha 5 to select five "teenagers with attitude" to defend the Earth from Rita's attacks. The five teens chosen are Jason Lee Scott, Kimberly Hart, Zack Taylor, Trini Kwan, and Billy Cranston. Zordon gives them the ability to transform into a fighting force known as the Power Rangers. This provides them with superhuman abilities and an arsenal of weapons, as well as colossal assault machines called Zords that can combine into a giant humanoid machine known as the Megazord.

The game consists of abridged episodes of the show with limited interactivity. Gameplay requires the player to press certain buttons at precise moments as they appear on screen. The player is instructed to press directions on the D-Pad or a button (

to kick) corresponding to the character's actions. The player's actions do not affect the outcome of the scenes, but the Power Rangers lose heath if the player fails to input the correct move at the right time. The screen shakes when this happens. Sometimes a flashing gauge appears to indicate that the player must press

rapidly to defend against an incoming attack.

The game ends if the Power Rangers lose all of their health, but it can be continued from the beginning of the current scene. Health is carried over to the next episode. At the end of each level, the player's progress is tallied. The player earns points for correct moves, with faster response times earning more points. The Power Rangers have their health meter refilled based on the amount of points earned, and the player earns an extra continue at certain points intervals, depending on the difficulty level selected (50,000 points in Beginner, 75,000 in Intermediate, and 100,000 in Expert). 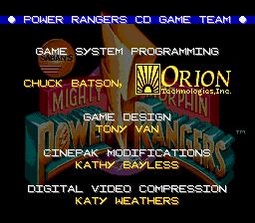