Sega Superstars Tennis is a tennis video game developed by Sumo Digital and published by Sega. The game was released in March 2008 in Europe, North America and Australia. It was not released in Japan. The game includes 16 playable characters, and 10 courts from Sega franchises, including Sonic the Hedgehog, The House of the Dead, Alex Kidd, Space Channel 5 and many others. Fifteen Sega franchises are represented in the game in total. 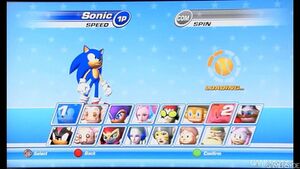 Superstar Mode allows you to play missions which include exhibition matches, tournaments and missions based around a specific Sega game including Sonic the Hedgehog, Puyo Pop Fever and Virtua Cop. Completing various missions allows you to unlock items such as courts, stages, soundtracks and characters. It is for single player only.

Exhibition Mode offers the chance to challenge the character of your choice, to a match on one of many courts, including Sonic's home court of Green Hill Zone, or Amigo's Carnival Park court. Wherever the players plays there will be a host of Sega celebrities cheering them on from court side and by partaking in doubles matches with their choice of partner.

There are several playable mini-games in Sega Superstars Tennis, including ones from Sega games such as a The House of the Dead meets Space Invaders game, in which the player has to hit moving targets, a Space Harrier game, a Puyo Puyo game, and a Virtua Cop game.

The PlayStation 3 and Xbox 360 versions both have online play