Segata Sanshirō (せがた三四郎) is a fictional Sega of Japan spokesperson known for his tough demeanor and insistence that gamers play the Sega Saturn. Portrayed by Japanese actor Hiroshi Fujioka, his name and appearance is a parody of Sugata Sanshirō, a character from Akira Kurosawa's popular 1943 debut film Sanshirō Sugata, and both a pun on the color of the domestic Saturn (shiro is the Japanese word for white) and the phrase "Sega Saturn shiro!" (meaning "You must play Sega Saturn!"). Sanshiro appeared in over two dozen tongue-in-cheek Sega commercials from November 1997 to November 1998, and is one of the companies most well-remembered advertising campaigns. In modern years, he has even developed a cult following outside of Japan, and still continues to be used in Sega's Japanese marketing.

In October 1998, Segata Sanshiro starred in his own Sega Saturn game courtesy of Ecole Software, Segata Sanshirou Shinken Yuugi. Later, his role as a company spokesperson was eventually inherited by his son Sega Shiro in March 2020.[1] 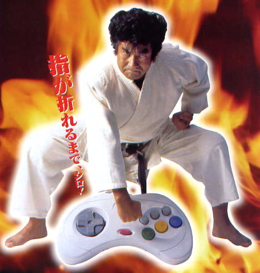 Sanshiro was most known for his intensive martial arts training, which involved regularly punching the buttons of a giant Saturn Control Pad.

Segata Sanshiro is portrayed as a judo master who regularly tracked down and harshly disciplined those who were not playing the Sega Saturn. Living as a hermit high on a secluded mountaintop, Sanshiro devoted his life to intensive training, and was usually seen carrying a massive Sega Saturn abroad his back; often, he would appear with an enormous Control Pad, strongly punching its various buttons to strengthen his mind and body.

The majority of Segata Sanshiro's commercials depict him as finding a group of Japanese people (often youths), and upon seeing that they are not playing the Sega Saturn, disciplining them by swiftly beating them to the ground and reminding them that they must play Sega Saturn.

With the winding down of the Sega Saturn, and the release of the Sega Dreamcast, Sega of Japan sent the character off with an explosive finale. In his last commercial, a giant missile is launched directly at Sega's Tokyo, Japan headquarters, with Sanshiro heroically jumping onto the missile itself, pulling it out of its trajectory with all his might, and redirecting it into the atmosphere. It safely explodes away from the general populace, and the commercial ends with a voiceover stating "Segata Sanshiro will live on in your hearts." 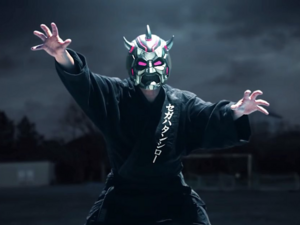 Sega Hatanshiro is Sanshiro's evil counterpart, and embodies the threat of Sega's failure.

Sega Hatanshiro (hatan is a Japanese word meaning bankruptcy or failure) is Sanshiro's evil counterpart, wearing a black gi and sinister oni mask. Bent on destroying Sega, Hatanshiro appears after a distraught Sega Shiro emotionally cries out "Father!!" among his classmates. The skies grow dark and Hatanshiro introduces himself, declaring menacingly that "Sega is out of fashion!" Hatanshiro's belief in Sega's failure grows so great that his power begins to manifest as a sinister red lighting emanating from each hands; Shiro's belief in defending Sega manifests as a blue version of the same, and soon the two are engaged in an intense battle of martial arts and strength.

Although Shiro defends Sega with all his might, he is defeated over and over again. Despite every failure, he stands up and continues fighting with everything he has. As the battle progresses, Shiro experiences a particularly-strong beating and is knocked to the ground, growing frustrated with his inability to overcome Hatanshiro. Only when he remembers the willpower of his late father Segata Sanshiro that he is finally inspired with the strength needed to defend Sega. For the first time, Shiro takes his trademark shoulder-draped gi off and instead slips his arms through its sleeves - the way his father wore it. After a brief standoff, the two rush at each other in one final strike - Hatanshiro initially gets the best of Shiro with an impending leg sweep, and appears to have defeated him once again. However, Shiro uses the opportunity to get Hatanshiro in a shoulder throw, shouting "I will... protect Sega!" and pulling him into the throw. Hatanshiro is thrown to the ground, and is finally defeated.

After the match, Shiro notices Hatanshiro's mask has been knocked off. As he kneels down to inspect it, he hears the voice of his father, telling him "You've grown..." Turning upwards, Shiro is shocked to find that Hatanshiro had actually been his father Segata Sanshiro all along, still alive and just as powerful as he always was. Segata explains that he wanted to properly test his son's belief in Sega, to ensure he would have the same strength of his legendary father - the strength of Sega to overcome failure.

In a heartfelt moment between father and son, Sanshiro passes the role of Sega's defender onto Shiro. However, he then asks his son to forget him entirely; that he's "just a relic of the old Sega now." He explains that the company has expanded greatly since Segata's time - that his skills were best suited for defending Sega in its past forms - and tasks Shiro with defending the Sega of the present. Shiro appears distraught, realizing what his father is implying. Segata addresses his son by his full name, grabbing him on the shoulders and ordering his son to throw him. After one final moment of reluctance, Shiro yells "Father!!" and performs a powerful tomoe nage throw, launching Sanshiro through the solar system and into the planet Saturn.

Shiro cries "Father!!" once again, but as he does, a quick fade reveals Sega Shiro had been dreaming while sleeping on his classroom desk, crying out "Father!!" in his sleep - much to the amusement of his classmates. As he wakes up in a sweat, he looks down and is shocked to find his father's black belt in his hands. Only now, it bears a message to his son: "I leave Sega in your hands."[2]

The character of Segata Sanshiro was largely created by Hiroshi Fujioka himself as a means to serve as a positive role model for children and young people. Fujioka says he was initially apprehensive about portraying a man that physically accosted people, to which he was instructed by producers to ensure his actions were portrayed less like violence and more like a judo punishment.

Fujioka's contract was set to expire near the end of the Saturn's life, but Sanshiro's popularity resulted in Sega extending his contract an additional few years into the life of the Dreamcast.

Sanshiro's popularity was so widespread that various merchandise related to the character was released, including the Sega Saturn game Segata Sanshirou Shinken Yuugi, the 1998 CD single Sega Saturn, Shiro!, and the computer utility and screensaver collection Segata Sanshirou Choujin Densetsu.