Shadowrun for the Sega Mega Drive is a top-down RPG/action game based on the tabletop role-playing game of the same name. Aside from sharing the same source material, it is entirely unrelated to the Sega Mega-CD game.

The story takes place in Seattle. Joshua, a Shoadowrunner, (term used to describe people who can solve problems for a price, such as mercenaries, spies or fixers) uses the last remaining nuyens in his wallet to travel to the city after he witnesses the death of his brother Michael in a news video. While trying to track down his brother's murderers, Joshua discovers a massive conspiracy that could potentially destroy the city.

Compared to the SNES version, the Mega Drive version of Shadowrun is considered by many as true representation of the table top PnP game due to its focus on the life of a shadowrunner and much more non-linear gameplay.

Shadowrun is a top-down RPG with shooting mechanics. While not exactly a true sandbox game, (like the ones we see today) game consists of large areas connected each other. Many non-playable characters exist in the game, allowing the player to converse with them in order to advance the story, conduct transactions and learn about the world they are witnessing while they are playing.

Players can take jobs from "Mr. Johnson"s (Shadowrun slang for brokers who give jobs to shadowrunners). These jobs are generally randomly created and difficulty is dependent on the person who is giving it, ranging from simple courier jobs to extremely tough extraction or acquisition jobs.

Completing missions will award player "Karma Points", basicly skill points without level up system. These karma points can be used to increase a particular skill when resting in hotels.

Money can be used to purchase weapons, armor, items, magic and cyberware.

"The Matrix" is Shadowrun version of cyberspace, in which players can hack into systems and acquire information, money or other files that can be sold for nuyen.

In addition to weapons, magic can be used for attacking enemies or giving various bonuses to the player.

A recruitment mechanics exists to hire other characters. Depending on how much you are willing to spend, a Shadowrunner can remain for just one job or for long run until you fire them or they are incapacitated during combat.

At the beginning of the game, players can pick any of the three classes. While it is technically possible to created a multi-class character, it is generally advisable to focus on one path (combat, hacking or magic) and stick to it.

Attributes and skills can be upgraded using "Karma" points which are acquired after completing missions, runs or killing enemies. Attributes require the same amount of karma points to upgrade to the desired level. For example, increasing Body from 5 to 6 requires 6 karma points. Players must stat at a hotel to spend karma points.

Weapons, accessories, items, armor and magic can be purchased or sold in shops around the Seattle. Negotiation skill affects the overall price.

Keep in mind that, several items are considered "ILLEGAL" in the game. Meaning that, if you are stopped by a Lone-Star patrol (Private police forces in Seattle) and do not have a permit, you can be arrested and forced to pay a hefty fine. All Shotguns, Submachineguns, Grenades, some armors and items are considered illegal.

All firearms, except shotguns can be modified with these accessories.

These cybernetic enhancements will reduce your Essence rating depending on how invasive they are. Magic users must stay clear of these.

Spells can only be unleashed by Shaman or Mage classes. Magic damage is affected by the level of magic, Sorcery skill and posture. Price of the magic changes according to level of the spell.

Magic items provide bonuses to your spells and other abilities.

These items are acquired through the story or from contacts and other NPCs. They do not require item space.

Decks are necessary for entering matrix. All cyberdecks' Memory, Storage and Loading attributes can be upgraded. For detailed information about The Matrix, see separate entry.

These programs are used in the Matrix. Just like spells they can be upgraded but more advanced and higher level programs will require more storage space in the cyberdeck.

Contacts are special individuals you can communicate through phones. If you can afford their services, they can provide expensive but powerful items and other valuables that can aid your game. Most contacts can be acquired from other contacts and Johnsons.

The term "Mr. Johnson" (keep your immature jokes to yourselves) describes fixers and agents who will act as a middle man between shadowrunners and the clients. They provide "runs" on behalf of the client, provide information and take their cut when job is over. There are several Johnsons around the Seattle who can provide you work.

Various people around the Seattle can be recruited into your team if you can pay for their services. Shadowrunners can be hired for either one job, or for the long term. If hired for a short duration they will stick around until a run is complete, fired or they (or Joshua) are knocked out. If hired for long term they will stay with Joshua until fired or knocked out.

Just like Joshua, Shadowrunners gain Karma points which can be used to improve their stats and skills. Players can also purchase equipment, weapons, spells and even cyberware for them.

Technically speaking, all Shadowrunners in the game, even the low level ones can be built into powerhouses as long as you let them tag along and build their abilities. 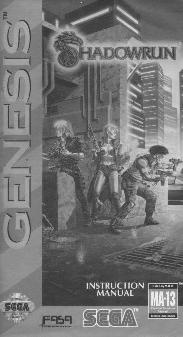