Argos no Juujiken (アルゴスの十字剣, lit. "The Crossed Blade of Argos") is a side-scrolling action game released for the Sega Master System by Salio. It is an adaptation of the 1986 arcade game Argos no Senshi (アルゴスの戦士, lit. "Warrior of Argos") by Tecmo, which was released in the west under the title Rygar. This is one of two Master System games to be published by Salio.

Argos no Jūjiken is much closer to the original arcade game compared to its Famicom counterpart released the previous year, titled Argos no Senshi: Hachamecha Daishingeki (アルゴスの戦士 はちゃめちゃ大進撃), which featured overhauled level designs and altered key elements of the gameplay, resulting in a very different product. However Argos no Jūjiken' lacks the end of level sequences from the arcade game, abruptly cutting to the next stage instead. 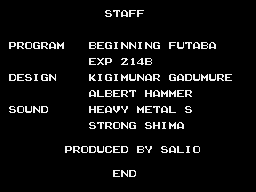