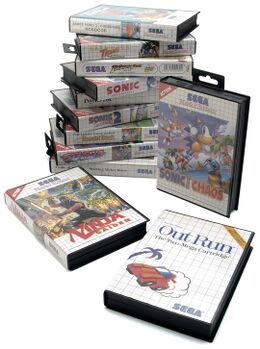 With about 360 Sega Master System games officially released during the console's lifespan (including the Sega Mark III), the Master System has a sizeable set of games in its library, but not as much as its successors.

The majority of the Master System's big hits were ported from the arcades, with Fantasy Zone, Space Harrier, and Out Run being amongst the more well known. Initially, Sega Master System games came in cartridge and "Sega Card" formats; the latter was phased out towards the end of the decade with developers adopting larger game sizes that only the carts could handle. By 1989 and 1991, the console had been phased out in Japan and North America respectively, but support continued to come in from European developers and publishers, and the console was kept alive well into the 21st century in Brazil.

This category has the following 22 subcategories, out of 22 total.