The Cyber Shinobi is a Sega Master System game released in 1990 by Sega. It is a futuristic-themed sequel to Shinobi starring the grandson of Joe Musashi.

The game was not well received because of its slow gameplay and the large status area that covers a third of the screen.

Cyber Shinobi is an action platforming game. The objective is to make it to the end of the stage and fight a boss. There are no hostages to rescue, unlike the previous Shinobi game. The player is occasionally prevented from proceeding onward at certain points of each stage until certain enemies are eliminated, similar to a side-scrolling beat-'em-up. Musashi walks with

. He can walk while crouching with

and jumps higher with

. Musashi's main weapon is a sword that he can use to attack his enemies with

. He can use his sword while in mid-air. He does a crouching kick with

Musashi has access to several ranged weapons, which can be used with

. By capturing shot power-ups, he can upgrade his ranged weapons. When the player first picks up a shot power-up, Musashi wields a shuriken launcher, which can be replaced with an automatic vulcan gun and then a supply of grenades by picking up subsequent shot power-ups. Each sub-weapon can hold up to eight shots each. When the player's current sub-weapon runs out of ammo, it reverts to the previous one.

Ninjutsu spells are performed by pressing

. There are a total of four ninjutsu spells, which increase in damage dealt but otherwise differ only cosmetically. Although each one requires a different number of units to perform, only two units are consumed when one is performed.

Break open item containers and move over items to collect. 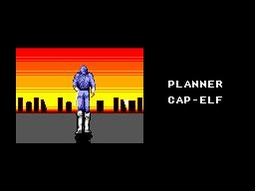