Astérix and the Secret Mission is a platform game for the Sega Master System and Sega Game Gear which was released in Europe and Brazil. Years after the original Brazilian release, Tec Toy released an altered version of the game rebranded as As Aventuras da TV Colosso.

In the age of Julius Caesar, the indominatable Gaulish warriors Astérix and Obélix help their village resist the Roman occupation. They do so with the aid of the magic potion brewed by the druid Getafix (Panoramix in French), which temporarily grants them superhuman strength. However, the magic potion has run out. Knowing that Caesar will send an invading army if he learns of this, Astérix and Obélix conduct a secret mission to gather the necessary ingredients.

The game is a side-scrolling platformer where Astérix and Obélix locate six herbs across as many rounds. The game can be played alone or with another player. In single-player games, the player can pick between Astérix or Obélix before each round. In two-player mode, each player takes turns completing the round, with player one playing as Astérix and player two playing as Obélix. Each character moves with

and jump higher if the button is held for longer. They attack enemies by punching them with

. They enter doorways with

. The rounds differ depending on whether the player is playing as Astérix or Obélix. The two characters differ more in how they play than in the preceding game, and some of the rounds are entirely different depending on which character is being played.

Astérix is diminutive in size and can fit into some areas that Obélix cannot. He can run by holding

. He can push objects with

. He can punch downward while in the air with

. He can double jump by pressing

again while in the air; this can also be done after running off a platform. He can find potions that let him destroy blocks by punching them. Potions are thrown a long distance in an arc with

or a short distance while ducking with

Obélix cannot double jump but has a longer normal jump. He can go down wells by pressing

. He can slide down a slope with

. He can do a bounce attack by pressing

while in mid-air. He can destroy blocks by punching them, using his jump attack, or hitting them from below with his head. He swims with

. Obélix can find the Menhir item for throwing at enemies and obstacles. Menhirs are thrown a long distance in an arc with

or a short distance while ducking with

The characters have a life gauge with three hearts. A heart is lost if the character is hit by an enemy, and a life is lost if all life gauge hearts are lost or if the character falls down a hole. Furthermore, rounds are timed, and the player loses a life if time runs out. The game ends if the player runs out of lives but can be continued from the start of the round. Life can be restored by picking up certain items during the game.

The rounds differ depending on whether the player is playing as Astérix or Obélix. The player can switch to a different character after each round. 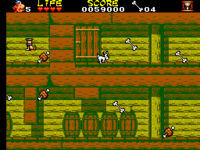 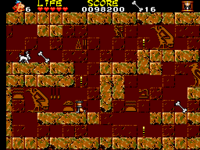 After some of the rounds, the player can enter a bonus round by having a number of bones that is a multiple of four. The bonus round is played as the dog Dogmatix (Idéfix in French), who runs around the stage collecting items for points. The stage ends if time runs out or if the player collects all of the items.