TecToy (formerly styled as Tec Toy and Tectoy) is a Brazilian electronics and video game company, and Sega’s official distributor in that region. The company has seen overwhelming success with sales of the Sega Master System, and its work established the 8-bit platform as a cultural staple across much of South America.

Tec Toy was founded in September 1987 (as Tec Toy Indústria de Brinquedos, Ltda.), as a joint venture[1] between Argentinian Engineer Daniel Efraim Dazcal[2] (founder and former Vice President of the Brazilian division of Sharp Corporation, Sharp do Brasil S/a Indústria de Equipamentos Eletrônicos) and German brothers[3][4] Leo[5][6] and Abe Kryss, owners of the Brazilian consumer electronics manufacturing and distribution company Evadin Indústrias Amazônia S.A[7], Tec Toy's major shareholder (founded in 1967[8] by their father, German businessman Josef Kryss, who moved to Brazil in 1958[3], the company became the exclusive importer and distributor of Mitsubishi Electric's TV sets and VCRs in Brazil and since 1972[8] a manufacturer of consumer electronics[9][10][11][12][13] of their own brand Aiko[14], with the purpose of making electronic toys, a niche that other Brazilian toy manufacturers had failed to notice. They quickly stroke a deal to become the exclusive representative of Japanese video game giant Sega Enterprises Ltd. Consequently, their first product was the Zillion infrared toy gun. In the coming years they would release all of Sega's game machines, from the Master System to the Dreamcast. Their success in the gaming field was so notable that toys became a minor - eventually abandoned - part of their business. 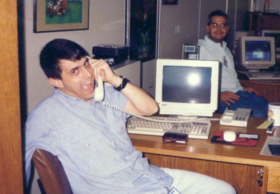 With Tec Toy, Sega had a huge advantage over rival Nintendo in the Brazilian market; although there were countless NES clones there, Nintendo had no official representatives until 1993. This way, the Master System was a massive success there, and Tec Toy even made some versions not released anywhere else. During the 1990s, Tec Toy had 80% of the Brazilian market.

In 1992 Sega granted Tec Toy the rights to distribute their products throughout the Mercosur region. They produced 50hz consoles for the Argentinian and Uruguayan markets, where they partnered with local companies Gameland and Forstar respectively. After Sega discontinued manufacturing of the Sega Master System in early 1996 Tec Toy took over the supply of hardware and software to smaller European markets where the Master System was still a viable platform. Ecofilmes (Portugal) and Zegetron (Greece) both imported Tec Toy's Master System III Compact and a selection of 15 games for the 1996 holiday season. The company made arrangements with distributors in other Latin American countries to sell their products, such as RCL (Chile) and Importadora Paiz (Guatemala).

Tec Toy translated several games to Portuguese, such as the first three Phantasy Star games (but not Phantasy Star IV, which only had a fan-made translation in 2004), Shining in the Darkness, and Riven (which also had its voices dubbed).

More interestingly, they have made unique ports and even developed original games. Some of these are: Street Fighter II for the Master System, Duke Nukem 3D for the Mega Drive, and an original Woody Woodpecker game for the Mega Drive. In 2000/2001 they released two Mega Drive titles based on Show do Milhão - a TV game show hosted by Silvio Santos in the same vein of Who Wants to Be a Millionaire?.

Even before the Dreamcast was discontinued and Sega withdrew from the console hardware business, Tec Toy realized that their long-time partner was failing, and decided to diversify. They now also sell karaoke devices, DVD players, and MP3 players. They also manage the Brazilian servers for Ragnarok Online. However, they still make older Sega consoles, especially variants of the Master System and the Mega Drive with dozens of built-in games.

Besides the videogames, Tec Toy's most successful toy was Pense Bem (Think Well): using books (themed history, geography, mathematics...) with questions, the kids clicked the buttons with alternatives in a machine. The toy responded if it was right or wrong. Some Pense Bem books included famous characters like Monica's Gang, Sonic the Hedgehog, Dinosaurs and Donald Duck. Without books, it served as a calculator.

Note: All dates listed next to games are for the Tec Toy Brazilian release of that game rather than the original release date.