OutRun (アウトラン) is an arcade game developed by Studio 128 in 1986 for specially designed hardware. It was designed by Yu Suzuki, and is often considered a milestone in the driving/racing genre, being ported to numerous home platforms and inspiring several sequels. Rather than be classed as a "racing game", Yu Suzuki classifies OutRun as a "driving game". 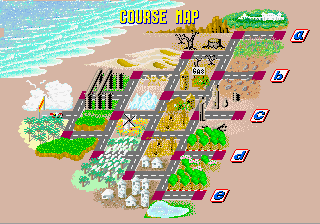 The goal of OutRun is to simply drive your sports car to one of the five goals, labelled "a" to "e", without running out of time. A pedal accelerates the car, and a steering wheel moves it left and right on the road. Due to limitations in the technology, it is impossible to fully turn the car around, nor is it possible to reverse.

Crashing into either other cars or scenery does not cause the player to lose lives, just time. After an area is cleared, checkpoints will allow the player to increase their time, and there will also be the option to select the next area through the form of a fork in the road. From a technical standpoint, every area is exactly the same length, though twists and turns can alter the amount of time needed to complete them. There are five possible endings, each with their own closing cinematic.

The car has two gears, high and low. When in the high gear, the car becomes harder to control, however the top speed of the vehicle is increased. To be successful in OutRun the player needs to switch between gears at the appropriate moments, e.g. switching to the lower gear while negotiating tricky roads, or if the player has just crashed.

The number of lanes of traffic also differs between stages. Although there is never a situation in OutRun where the cars travel in the opposite direction to yourself, the introductory level for example has six lanes of traffic.

Some stages appear in a different order between the Japanese and overseas releases of the game:

Coconut beach was later used as a stage in Sega Superstars Tennis.

OutRun was designed by Yu Suzuki, and for the most part stands as the logical progression from the earlier Hang-On (and to a lesser extent, Space Harrier). All three make use of Super Scaler technology in an attempt to deliver a sense of speed and deliver a 3D look and feel. It is said Suzuki got the idea for producing OutRun from the 1981 film The Cannonball Run.

Initially the plan had been to follow the course of The Cannonball Run, however Suzuki noted that the course lacked the variation in scenery he had hoped for. Instead, the attention turned to Europe, but in order to get a clearer vision of its scenery, Suzuki decided to travel and collect data first hand.

Interestingly the first sequel to OutRun, Turbo OutRun would span North America, though Europe would be explored in more detail in another sequel OutRun Europa.

Yu Suzuki is noted for being a fan of Ferrari supercars, and although OutRun is not officially licensed by Ferrari, the player's car looks strikingly similar to a Ferrari Testarossa, right down to the rear badge. Suzuki first encountered this car in Monaco, and decided it was the perfect choice for the game. Unfortunately at the time the car was not common in Japan, which presented difficulties when it came to road testing. Allegedly five members of Sega AM2 squeezed into a privately owned model for a three hour road test during development. They also took photos and recorded the sound of the car's engine.

The specific Testarossa in OutRun is a work of fiction, as Ferrari did not produce convertible models (save for a special silver "spider" model for Gianni Agnelli, which has an entirely different rear grill). Third-parties would sell modified convertible Testarossas later in the decade with a similar appearance, but this was after OutRun's launch.

The Ferrari Testarossa in game attempts to simulate the real-life features of the car, e.g. horsepower, torque, tires, gears etc. Suzuki designed OutRun in a very different way to previous racing games - in OutRun, good real-life drivers are rewarded for their skills in game, and bumping into other vehicles does not cause the car to explode (unlike many other older racers).

Sega did not consult Ferrari over the inclusion of the Testarossa in game, and would later meet in court several times over the matter. It is assumed a deal was reached as the car has never been modified for any future releases, and in fact, Ferrari have gone as far officially sponsor several racing games, starting with F355 Challenge (also designed by Yu Suzuki) and OutRun 2 and its derivatives. Other cars on the road appear to be a 1972 Volkswagen Beetle, a 1971 Chevrolet Corvette, a 1985 Porsche 911, a 1985 BMW 325i Cabriolet E30 and a generic truck.

The music of OutRun was composed by famed Sega musician, Hiroshi Miyauchi, and was extremely popular. Each of the three in-game music tracks were much longer and more varied than what other arcade games were offering at the time, and unlike every other racing game on the market, OutRun allowed the user to pick a music track to race with. Originally the soundtrack was to consist of eight different rock tracks running at 150 beats per minute, though hardware restrictions forced this idea to be scrapped.

Suzuki claims he was only able to achieve half of his original goal in OutRun. Originally eight different sports cars were planned with differing stats, and cutscenes were due to occur at checkpoints, giving the player a story. Some of these features would be added in later OutRun games.

OutRun came in four distinct styles of arcade cabinet, two upright and two sit-down. Each comes with a steering wheel and stick shift plus acceleration and brake pedals. Though steering wheels had appeared in countless Arcade games previous to Sega's game, OutRun was the first to have force feedback in order to simulate the road surface. The deluxe sit-down cabinet is also equipped with hydraulics which move the seat as the player turns.

The game has been decompiled[20], with the process revealing several interesting facts about the game. Unused code allows traffic to move towards the camera, and an unused "You're Doing Great" sample from Space Harrier exists. The game is also capable of showing "lap times" (the time taken to complete an area - OutRun has no concept of "real" laps). Much of the code from the game would be recycled for games such as Super Hang-On.

Two revisions of the game are known to exist - the latter adding some extra text to the music selection screen and adjusting the first area slightly. Depending on version or region, the track layout can also differ.

OutRun was a pioneer in video game graphics, audio and arcade cabinet design, picking up multiple awards during the late 1980s. It was the best selling arcade game of 1986, with over 20,000 cabinets sold worldwide within a year. It sold 30,000 arcade cabinets worldwide by 1993.[21]

OutRun was a big success in arcades, so it was inevitable that ports would be made to home platforms. At the time, these systems were seen to be vastly inferior to the hardware powering OutRun, and numerous cuts were made.

Pony Canyon handled an MSX2 conversion which only saw release in Japan. There is also a PC Engine port, published by NEC Avenue. An X68000 port by Hertz was planned, but cancelled, according to an interview with a former staff member[22]. Reportedly a Sega 32X version was also in development at one stage[23].

Sega were also quick to port the game to their own systems. Sega Master System and Sega Game Gear ports were handled in-house by Sega, as was a Sega Mega Drive version, seen for a while to be the best home port of OutRun with faithful stages design and which even includes an exclusive music track called Step on Beat.

A Sega Saturn version of the game was only released as a stand alone title in Japan as part of their Sega Ages series. It was later bundled with Space Harrier and After Burner II to make the western title Sega Ages: Volume 1. Since then, the majority of home ports of the game have been almost identical to their original arcade counterpart, with the exception of mobile phone versions and the version included in the 2004 Sega Arcade Gallery Game Boy Advance compilation (whose resolution was changed to fit the console's smaller screen).

OutRun was also released as part of the Sega Ages 2500 PlayStation 2 series in Japan, and is fully playable within Shenmue and Shenmue II. The Shenmue versions alter the player's car so that it looks less like a Testarossa, as does the one version included in Yu Suzuki Game Works Vol. 1. OutRun is also unlockable within the Xbox port of OutRun 2 SP.

The game saw many sequels, however the "true" sequel comes in the form of Turbo OutRun, a 1989 arcade release also by Sega AM2. By obtaining a kit from Sega, arcade owners were able to "upgrade" OutRun into Turbo OutRun, as the two games run on identical hardware. Turbo OutRun offers several new graphical features and a turbo button.

In late 1987 footage from OutRun was used in a 30-second television advert in the United States to warn against drink driving (the idea being to convey that crashing in a video game as a result of alcohol has no real life consequences). A joint project between the Mothers Against Drunk Driving (MADD) and American Amusement Machine Association (AAMA), Sega agreed to remove its name and logos for what it perceived was the greater good[24].

OutRun has also left a lasting legacy in music. An entire genre of music is named after OutRun, called outrun music, also known as synthwave. The genre name "outrun" is due to how Hiroshi Kawaguchi's OutRun soundtrack has the kind of 80s synth vibe that characterizes synthwave. 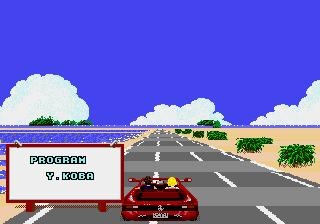 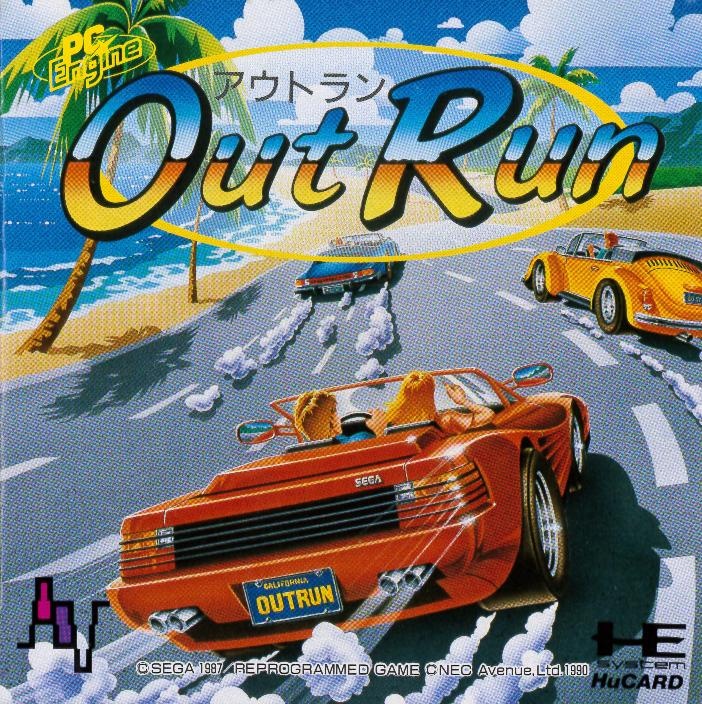