For the Japanese re-release version, see US Shenmue.

Shenmue, called Shenmue: Ichishou Yokosuka (シェンムー 一章 横須賀) in Japan (i.e. "Chapter I: Yokosuka") , is an adventure game produced and directed by Yu Suzuki and developed by Sega AM2. It was published by Sega for the Sega Dreamcast in late 1999.

Shenmue stands as one of the most significant video games ever published by Sega, at the time being the most expensive game ever produced, and having unparalleled interactivity and freedom, real-time day/night and weather systems, fully voiced non-playable characters and cutting edge graphics. Borrowing from many genres of video games, Suzuki coined a new genre name, "F.R.E.E." (Full Reactive Eyes Entertainment) to describe it.

As the Japanese name suggests, Shenmue consists of the first chapter in what is currently an unfinished story. 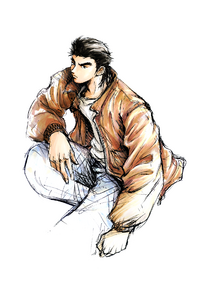 The fictional story of Shenmue begins on November 29, 1986, in the perspective of the protagonist Ryo Hazuki (芭月 涼 Hazuki Ryō) returning home to his family dojo to witness his father, Iwao Hazuki battling with a man named Lan Di, dressed in Chinese attire, who demands he hand over an item known as the "Dragon Mirror". Ryo intervenes in battle after his father is felled, but is injured by a blow from Lan Di. As his father refuses to reveal the location of the mirror, Lan Di lifts Ryo from the ground and threatens to kill him with a final blow, which prompts Iwao to reveal its location underneath the Cherry blossom tree.

After Lan Di's henchmen recover the mirror, he asks Iwao if he knows of a man called "Sunming Zhao" and then kills him after forcibly asking him to stand as a warrior to face his end. As Ryo lies injured on the floor of the dojo, Lan Di and his men leave the Hazuki household. After Ryo has partially recovered he feels that he must dutifully gain revenge for the murder of his father, and begins to instigate inquiries into the incident with the local people of his hometown, Sakuragaoka.

Ryo's first clue is a car that some of his neighbours saw on the day of the murder. Though his leads are few and far between, Ryo slowly makes progress in his investigation by interviewing people all over Yokosuka. Just as he is about to run out of leads, a letter from a man named Yuanda Zhu suggests that he seek the aid of a certain Master Chen, who works at the harbour. Through Chen and his son Guizhang, Ryo learns that a local wharf gang known as the Mad Angels is connected to Lan Di's crime organization, the Chiyoumen. Ryo also learns that "the mirror" stolen by Lan Di is part of a set of two mirrors. After much investigation, he locates the second mirror underneath his father's dojo. This mirror is decorated with a Phoenix.

Ryo takes a job on the waterfront in order to learn more about the Mad Angels gang, and eventually he causes them enough trouble that the gang kidnaps his friend (and principal love interest) Nozomi Harasaki. To rescue Nozomi, Ryo must first fight Guizhang, then team up with Guizhang to defeat all seventy members of the Mad Angels gang. Upon defeat, the gang's leader reveals to Ryo that Lan Di has left Japan for Hong Kong. With the aid of the Chen family as well as his family and friends, Ryo boards a boat to Hong Kong. Before the close of the first chapter (and subsequent end of the game itself), he is instructed by Master Chen to seek out the help of a master of the Chinese martial arts located in Wan Chai named Lishao Tao. 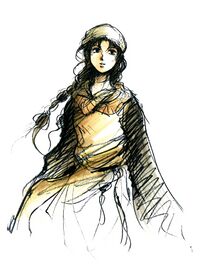 Concluding the first chapter of Shenmue, Ryo boards a boat and travels to Hong Kong in pursuit of Lan Di.

Shenmue was envisioned as the next evolution of RPGs, although its design incorporates a number of genres, attempting to simulate life in the mid-1980s while also including puzzle solving, fighting segments and even the occasional race. The game is very much story-driven, and uses very simple mechanics designed so that anyone could play (as opposed to the likes of Virtua Fighter, which Yu Suzuki claimed were too daunting for younger players).

Most of the game is spent, as Ryo, walking around Yokosuka in Japan, talking to people. It is interspersed with many "mini-games", including forklift and motorcycle races, bar fights, chases down crowded alleys, full versions of Sega arcade games Space Harrier and Hang-On, dart games and 'free fighting' sequences. The game was remarkable for its time for allowing the player to talk to every NPC they came across (who are in turn, fully voiced) and allowing Ryo to interact with hundreds of object seen in the game.

Shenmue is governed by an in-game clock and fully implements a day-to-night cycle, with certain events only occuring at certain times of day (or indeed year, in some cases). Players are not, however, restricted by the date and time - it is fully possible to spend in-game months and years in an area. How the player plays the game in this first chapter of Shenmue was originally set to influence the story in later chapters, though this feature was never fully implemented.

Weather also changes depending on the time of year, and is reportedly based on observed real-world weather patterns of the mid-to-late 1980s.

Most of the action occurs in quick-time event (QTE) sequences, in which cutscenes differ in outcome depending on your accuracy in hitting buttons in a timely fashion.

As opposed to standing still and dispensing the same lines of dialogue, as is common to most RPGs, non-playable characters in Shenmue live their lives in accordance to Japan's then-5½-day working week, leaving their houses to start work, taking lunch breaks and going home at the end of the day[16]. The development team also made sure each NPC has its own name, age and hobbies, and characters will also react to the weather, with some taking out umbrellas when it begins to rain.

Shenmue saw wide critical acclaim after release due to the many revolutionary features it brought to the world of video games. However, despite the praise, Shenmue struggled to sell. Some critics believed the game was far too slow and self indulgent. Though easy to sell to Japanese audiences, Western consumers found the game's themes unappealing.

The game sold at a massive loss, and it is predicted that every Dreamcast owner would have needed to buy the game twice in order for it to turn a profit. Initial plans were to create a trilogy of Shenmue games, and although Shenmue II saw a release (with a much smaller budget), Shenmue III has been in development hell for nearly a decade. In June 2015, a Kickstarter campaign for Shenmue III was announced by Yu Suzuki at Sony's 2015 E3 press conference. It was successfully funded and the game is currently scheduled for release on August 27, 2019.

Shenmue includes both Japanese and English speech/subtitles in the West. However in Japan, only Japanese was an option. For unknown reasons Sega would later release US Shenmue in Japan - exactly the same game but with the English dub.

On August 21st, 2018, a remastered version of Shenmue (bundled with Shenmue II) was released for Windows, PlayStation 4, and Xbox One.

While considered a market failure, Shenmue has developed a cult following and remains one of the highest rated Dreamcast games ever made. Many of its ideas regarding an open, freely explorable world have been revisited in the Yakuza series of games, starting with the original PlayStation 2 Yakuza in 2005.