Daytona USA (デイトナＵＳＡ) is a Sega Model 2 arcade racing game developed by Sega AM2. It was initially given a limited release in Japan in 1993 to gauge public reaction to the new model hardware before its full, international release the following March.

It is loosely based on the NASCAR racing event at the Daytona International Speedway, located in real life in Daytona Beach, Florida in the United States of America. Daytona USA and all of its sequels and rereleases (except Sega Racing Classic, in which case someone else already held the arcade license) have been officially sponsored by the International Speedway Corporation.

The original arcade release has the player drive a stock car, known as the "Hornet" (number 41, producer Toshihiro Nagoshi's "lucky number") loosely based on a Chevrolet Beretta, racing against numerous other cars around three selectable tracks. Player one's car by default is coloured red and blue (the manual car uses a red, black and yellow colour scheme), and can be seen at the forefront of all game covers, flyers and similar media related to the series with the exception of Daytona USA 2 and its update, Daytona USA 2: Power Edition.

The game features both automatic and manual transmissions, the latter requiring use of the gear stick and which, if used properly, can lead to a faster car than the automatic. Crashing into walls or other cars can inflict damage leading to poor performance - to remedy this each level has a pit lane, which, by sacrificing some time, can fix the car.

Daytona USA has smarter AI than many other driving games from around this period. The computer analyses the player's skill during the first lap, and will instruct rival cars to move out of the way if it feels the player is doing poorly (while doing the opposite if the player registers a fast time). Most notably, however, is Daytona USA's multiplayer features. It was the first arcade game ever to allow up to eight cabinets to be linked together, with each player capable of competing in the same race. Each player assumes the roll of a different coloured Hornet, and each cabinet must be ready to race and agreed on a course before this can happen (otherwise the game may start up with less than eight players).

The game also has Team Hornet inform the player of turns and traffic, and will comment on your driving if you crash. Most of the rival teams in the game are not named, however several adopt the logos or colour schemes of Japanese car magazines, which in return wrote articles about Daytona USA[18].

Note: In the original Model 2 version of the game, tracks were not given names. It was only subsequent ports (and the official Daytona USA soundtrack) which named them.

The idea of Daytona USA was conceived during one of Toshihiro Nagoshi's visits to North America, where he went to watch a NASCAR race. At the time, his team were looking for new ways to expand and develop the racing genre, and the simplistic-yet-exciting nature of NASCAR prompted the team to try and emulate this in video game form.

The soundtrack was composed and performed by Takenobu Mitsuyoshi, however in the Model 2 version he does not sing entire songs at once. Instead parts of his vocals were recorded and played at various pitches and lengths in order to construct songs, hence their arguably simplistic nature. This is because Model 2 hardware has comparatively limited sound capabilities compared to systems which rely on CD audio.

Daytona USA's original arcade release was notable for a number of reasons. At the time, it was considered perhaps the most detailed 3D racing game ever created. Unlike Sega's previous creation Virtua Racing (released in 1992), the 3D world was fully texture-mapped, giving the impression of a more realistic world. It was also the first game to use texture filtering, allowing smoother graphics. Coupled with the graphical advances, Daytona USA is able to keep a constant full 60 FPS refresh rate, even with multiple on-screen opponents.

The 1994 worldwide arcade release has slightly better AI than the 1993 Japanese original, but is otherwise identical. Other arcade revisions of the game involve advertisements for the Sega Saturn. The deluxe cabinet version features a large 50-inch display.[19]

During development the game was originally known simply as Daytona, and then briefly as Daytona GP.

A port was planned for the Sega 32X, announced in early 1994[6], but ultimately failed to materialise.

When developing Sega Rally Championship, Sega AM3 suggested that Daytona USA was only using "50%" of the Model 2's capabilities[20].

Due to its popularity, Daytona USA was released as a Western launch title for the Sega Saturn in 1995. This version, like the Sega Saturn itself, was rushed for a quick release and was widely criticised for its lower framerate (~20FPS) and numerous graphical concerns. This lead to Sega releasing an update; Daytona USA: Championship Circuit Edition. Like Sega Rally, this version was tuned up and offered a more stable framerate with more tracks and features.

Championship Circuit Edition would mark the first in a long line of sequels, which, with the exception of Daytona USA 2, simply took the formula of the original arcade game and "upgraded" it, rather than offering a brand new experience. Sega Racing Classic, released fifteen years after Daytona USA is even worse in this regard, as it is almost identical in nature bar some increased screen resolutions and missing Daytona branding (as another arcade company already acquired the arcade license at the time).

Daytona USA was the second of two "big" games announced early in the development of the Sega Saturn console (the other being Virtua Fighter) and became one of the first first-party games to arrive on the platform. While ultimately Panzer Dragoon became the first Saturn released game to push texture-mapped polygons, Daytona USA was given much more coverage in the press due to its performance in the arcade scene.

However, views on the end product were mixed, with the Saturn version receiving severe cutbacks to both run relatively smoothly on the platform and meet its release date. Most notably, the game runs at only a third of the frame rate of the arcade, averaging roughly 20 frames per second. Polygon counts were lowered across the board, as was the screen resolution and texture detail, though some of this is made up with a higher quality CD audio soundtrack (Takenobu Mitsuyoshi re-recorded each song from beginning to end rather than splice clips around like in the Model 2 version). Also offered are new gameplay modes and options, such as a two-player split-screen feature.

On the Saturn, Daytona USA's draw distance is significantly shorter, meaning only scenery close to the Hornet is rendered at any given point. While not uncommon for games of the era, Daytona USA makes no attempt to hide the flaws, leading to obvious clipping and pop-in issues as geometry suddenly appears on screen (later Saturn games would use "fogging", which gives the impression that the world "fades out" when it reaches the end of the draw distance, or simply made arrangements so that the draw distance was longer). The camera is considerably more jerky in some sections of the game.

This was not seen as a good thing for the Saturn, as the PlayStation's port of Namco's Ridge Racer, released at a similar time, was neither rushed nor struggled to mask graphical concerns (it is also widely considered that the arcade version of Daytona USA is more technically advanced than the arcade version of Ridge Racer). These sorts of issues in early Saturn games gave users the impression the PlayStation was much better equipped to handle 3D worlds, which, in the west at least, was seen as the way forward for video games.

The Saturn version does include some enhancements however, such as the option to play as the other cars seen in the arcade version. It is compatible with the Arcade Racer and surprisingly, the 3D Control Pad (released a full year after Daytona USA). The game interprets the 3D Control Pad as an Arcade Racer when it is set to "analog".

The Saturn version of Daytona USA was ported to Windows PCs in 1996, and offers only limited improvements over its console counterpart. By default the game does not use "true" hardware acceleration (using the Windows DirectDraw API - a 2D rendering system not always tailored for the many competing 3D accelerator cards on the market at the time), rendering an image similar to that of the Saturn (complete with "checkerboard" semi-transparency).

By default the game targets a 640x480 resolution, however assets are unchanged from the Saturn version, and so are crudely resized in software. 3D elements are rendered at the native resolution, although computers of the day would struggle to maintain a consistent frame rate at these settings. As compensation, a lower resolution option exists, but with different elements resizing in different ways, the picture is noticeably more distorted than its Saturn counterpart.

Options exist to turn some of the background scenery into wireframes, but one can also go in the other direction, extending the draw distance beyond the default Saturn distance.

In Japan (and possibly elsewhere), two versions of the PC port were released due to the changing nature of the PC market of the time. The first "Requires Expansion Board" version (HCJ-0110) is optimised to take advantage of the Diamond Edge 3D and Leadtek WinFast 3D GD400 video cards, while the second (HCJ-0121) utillises Microsoft's DirectX technology (and requires Windows 95). Content wise the two versions are identical. 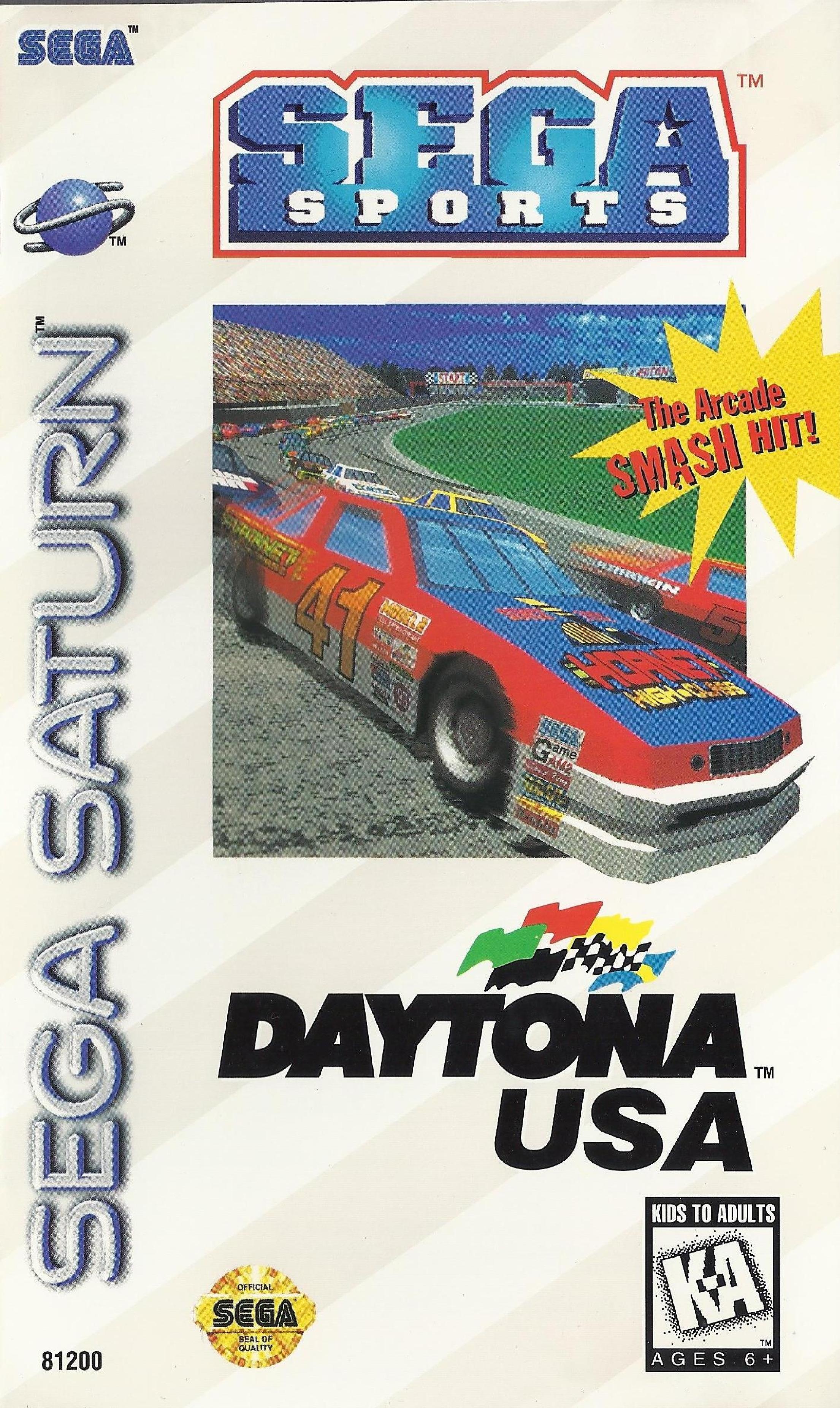