Phantasy Star (ファンタシースター) is a Sega Master System role-playing game developed by Sega R&D 2 and published by Sega. First released in Japan in December 1987, the game is the first in the long-running Phantasy Star series, and was released to critical and commercial success. It is regarded as a landmark RPG as well as one of the greatest Master System games. It is notable for its "science fantasy" setting, which blends medieval fantasy and science fiction, and for being an early example of a game with a female protagonist. 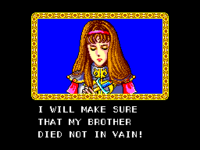 The game is set in the Algol star system, which consists of three planets: the lush and green Palma, the arid and barren Motavia, and the icy and desolate Dezoris. Algol is ruled by King Lassic, who, while originally benevolent, becomes a cruel tyrant. After a string of harsh political changes, small pockets of rebellion emerge but are mostly ineffective against Lassic's iron rule. One such rebel named Nero is killed by Lassic's forces, and his sister Alis swears revenge. 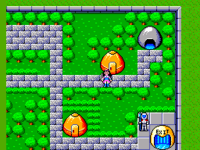 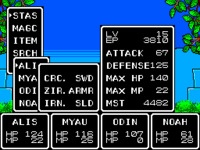 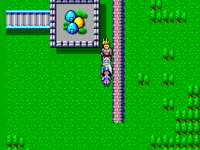 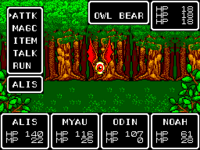 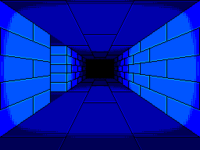 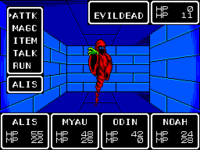 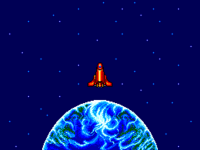 Phantasy Star is a role-playing game. The player controls the main character Alis. As the game progresses, other characters are recruited to her party: a talking cat-like creature named Myau, a warrior named Odin, and a wizard named Noah. Each character has different strengths, weaknesses, and abilities. The party has a shared inventory of items and equipment.

The game uses a top-down perspective when the player is traversing the overworld but switches to a first-person view when exploring dungeons or engaged in battle. When exploring the overworld, the player can venture into a town to buy items and weapons in meseta, the game's currency, or talk to townspeople. Later in the game, the party acquires vehicles to help navigate tricky terrain in the overworld. Outside the towns, monsters may randomly engage the player in battle. The player can enter dungeons and caves from the overworld. Dungeons use a simulated 3D perspective. They are long and labyrinthine and require the player to map most of them on paper (or use a guide or other resource). Many dungeons are dark and require the player to use an item to illuminate them. Dungeons include random encounters with monsters as well as unique encounters against boss characters. Dungeons can also contain treasure chests and NPCs, including vendors.

When encountering enemies, all party members enter into battle. Battles are handled using a menu system. Each character in the party gets a turn and can be ordered to attack, use magic, use an item, or try to escape the encounter. The player can also attempt to talk to an enemy to avoid a battle. Battles can involve multiple foes of the same type, but only one is shown; the player cannot choose a particular enemy to target. Characters and enemies are defeated when they run out of hit points. When the enemies are defeated, party members gain experience points and are rewarded with a treasure chest that usually contains meseta or an item. Some treasure chests contain booby traps that damage the party. As the characters gain experience points, they increase in level, gaining access to new magic spells and raising their offensive and defensive statistics.

If Alis is defeated in battle, the game ends; other party members can be revived at a church in town. Characters can be healed using spells, consumable items, or hospitals (for a fee). Some towns contain houses where the party can replenish their hit points and magic points for free.

The story spans the three worlds of the Algol system. Alis and her party can travel between the planets of Palma, Motavia, and Dezoris at spaceports after acquiring a Passport.

When out of battle, the player can invoke a menu to view the status of any character, manage items, or save the game at any point. 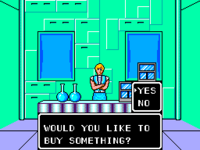 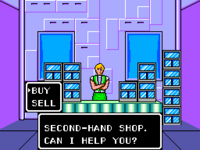 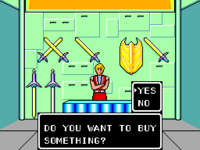 The game was conceptualized to compete with other RPGs that were becoming popular among Japanese developers, including the Dragon Quest series on the Famicom. Employees at Sega R&D2 were asked for ideas for a new RPG, and Chieko Aoki submitted a story outline that would become Phantasy Star. A development team was formed by lead designer Kotaro Hayashida and lead programmer Yuji Naka. Naka would later produce Phantasy Star Online. The game features the work of lead artist Rieko Kodama, who had previously worked with Hayashida on Alex Kidd in Miracle World and who drew the majority of the artwork in the game. Kodama would go on to direct or produce the RPGs Phantasy Star IV, Magic Knight Rayearth, and Skies of Arcadia. It is also the first game that Naoto Ohshima worked on. Naka, Kodama, and Ohshima would notably work together again on Phantasy Star II and Sonic the Hedgehog. 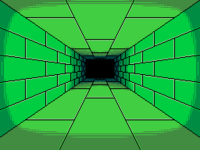 The game uses a 4 Mbit cartridge, a large size for the time. The only other Master System games to use such a large ROM chip are After Burner, SpellCaster, and R-Type. The game also uses a battery backup, which made its retail price higher than most other games of its time.

In 1994, Sega released a version for the Sega Mega Drive, Phantasy Star Fukkokuban (ファンタシースター 復刻版). This version is merely the Master System version on a Mega Drive cartridge PCB with the appropriate connector pin to signal Master System mode changed accordingly (which is how passthrough devices like the Power Base Converter work.)[18] The situation behind this release is unknown, but it is generally believed that it was a contest giveaway.[19]

The game has been re-released many times. It was included in Sega Ages Phantasy Star Collection for the Sega Saturn in 1998. This version of the game includes both hiragana and katakana alphabets, an improvement from the original, which had only katakana due to memory constraints. It was released as part of Phantasy Star Collection for the Game Boy Advance in 2003. This version modifies the game slightly to fit the Game Boy Advance's screen aspect ratio and fixes some errors in the English translation. It was released as part of Phantasy Star Complete Collection for the PlayStation 2 in 2008, with some minor enhancements such as the ability to speed up the walking speed. It is available as an unlockable in Sega Mega Drive Ultimate Collection, released for the PlayStation 3 and Xbox 360 in 2009. It was made available on the Wii's Virtual Console service in 2009. More recently, it was ported to the Nintendo Switch by M2 as Sega Ages Phantasy Star in 2018. This version of the game includes enhancements such as options to make the game easier and faster, guides for items, spells, and monsters, the FM soundtrack, hiragana support, and a dungeon auto-mapping feature.

The game was remade as Phantasy Star Generation: 1 for the PlayStation 2. This version has new graphics, real-time 3D dungeons, new music, more cutscenes with extended dialogue, and overhauled gameplay mechanics, including an updated battle system.

Note: Finos Pata is not credited in the original Japanese release.