In 3090, twenty-one years after Episode I and II, Principal Tyrell was supplanted by Dol Grisen because Tyrell had been unable to explain the destruction of Pioneer 1. Under Grisen's dictatorial rule, Pioneer 2 declared its independence from Coral. Grisen, in his lust for more power, allocated the majority of the ship's resources to the military -- primarily towards the development of cloning Technology.

As Pioneer 2's scientists researched cloning in accordance with Grisen's mandate, they discovered an energy source that rivaled Photon in power. This technology, dubbed C.A.R.D. Technology, is able to seal the world's phenomena into cards. These cards can hold anything from animals and weapons to skills and techniques, which can be instantly materialized at the whim of the user. To increase the development of C.A.R.D. Technology, Pioneer 2 began the colonization of Ragol.

A group of Hunters on Pioneer 2 are allowed to use this experimental C.A.R.D. Technology to help carry out the requests of scientists, who are directly under Grisen's command. Most requests are to counter the acts of a rebel group known as Arkz. The Arkz have learned how to replicate C.A.R.D. Tech and have managed to apply it to the creatures of Ragol. With their new found power, the Arkz fight to expose the government's corruption, and keep them from overdeveloping the planet for their own gain. 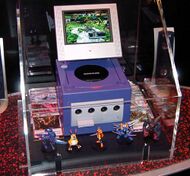 The E3 2002 display alongside the reported stolen character figures.

The concept for what would be known as Phantasy Star Online Episode III: C.A.R.D. Revolution came about from Nintendo's idea for a portable screen peripheral which can be used in conjunction with the Nintendo Gamecube's LAN multiplayer capabilities for portable Multiplayer gameplay. Phantasy Star Online Episode III: C.A.R.D. Revolution (Then known as PSO Card Battle) was initially developed to take advantage of the proposed Gamecube link up and portable features.[3]

At E3 2002, Nintendo announced SEGA's new project, PSO Card Battle and presented a prototype playable on the aforementioned portable LCD screen. At an Iwata Asks it was revealed that these screens were intended to be capable of auto stereoscopic display though the only confirmed game to have been intended to use this feature was Luigi's Mansion[4], whether Phantasy Star Online Episode III: C.A.R.D. Revolution would have supported stereoscopic 3D display is not known. The portable LCD screen would unfortunately never see release and the final game would launch without any LAN party support, thus local Multiplayer functions much like Phantasy Star Online Episode & II sans any form of split screen. Alongside the game prototype there was also physical game cards and five prototype figurines based on characters and enemies from the Phantasy Star Online universe which were unfortunately stolen during the event[5].

Despite the game originally being intended for the Gamecube, the final game contains unused graphics for a PSO Card Battle prototype that has references to PC functions (e.g "Press Enter Key").[6] Furthermore the game would at some point be rumored to have an Xbox version in the works.[7]

The game would be unveiled as Phantasy Star Online Episode III: C.A.R.D. Revolution on E3 2003, revealed as the continuation of the story arc from the previous Phantasy Star Online games.[8] Prior to the game's launch, SEGA held an open trial in Japan wherein the first 10,000 users to sign up would be chosen to participate from July 24th to September 16th. The game would launch in Japan on November 27th, 2003 with a US and European release following up the next year on March 2nd and June 11th.

Much like previous Phantasy Star Online releases, the game required a unique Serial Code and Access Key to play, but the player could alternatively use their Phantasy Star Online Episode I & II to keep their Guild Data (though no character transfer support). Furthermore, aside from the five unique CARD lobbies, Episode III players can interact with Episode I & II players in their respective lobbies and chat together. The game also contained a hidden preview for Billy Hatcher and also allowed the player to receive free bonus cards by saving their game data on a memory card containing save data from other Sonic Team games.