Boogerman: A Pick and Flick Adventure

Boogerman: A Pick and Flick Adventure is a Sega Mega Drive action platform game developed and published by Interplay. First released in the United States in November 1994, and later brought to Europe, Australia, and Brazil the following year, the game is most remembered both for its juvenile premise, and its surprisingly-high production values (notably featuring extensive voice acting).

The civic-minded Professor Stinkbaum has been secretly building a machine called Zap-o-Matic to save the world from pollution by transporting it to a place called Dimension X-Crement. While working in his lab above Takey Dump, he is visited by eccentric millionaire Snotty Ragsdale. After activating the machine, Ragsdale inhaled a cloud of pepper through his nose, causing him to let out a mighty sneeze. The power of the sneeze broke the machine, opening a portal. A mysterious giant arm popped out of the portal and stole the machine's main power source, the rare element Snotrium 357. Snotty changed into his alter ego, Boogerman, and jumped into the portal to retrieve the Snotrium 357.

The game is a side-scrolling platformer with puerile humor themes. Boogerman moves with

and jumps off platforms with

. He can rummage through trash piles by holding

, which can uncover items. He poses heroically and proclaims "Booger!" with

, which has no apparent gameplay effect.

Boogerman has a mucous meter and a gas meter for managing his special attacks. He flicks boogers as a short-range projectile attack with

, which expends the mucous meter. This attack can also be done while jumping or ducking. If Boogerman finds a milk item, his booger attacks are upgraded to loogies, which travel the full length of the screen. This effect lasts until he takes damage.

, which expends the gas meter. This attack can be charged into a "super burp" by holding

until the gas meter flashes and then releasing the button. Super burps travel the full length of the screen and can break through certain barriers. If Boogerman is ducking, he instead farts with

. Similarly, this attack can be charged into a "super fart." If Boogerman finds a chili pepper item, his gas attacks become fiery and he gains the ability to fly by holding

while in midair (which also costs gas). This effect lasts until he takes damage.

Boogerman's health is represented by his cape, which changes from red to yellow when he takes damage from enemy attacks. His cape flashes quickly after he is hit to indicate that he is temporarily invulnerable. If he is hit while his cape is yellow, he loses a life. The game uses a password system for continuing.

Most of the worlds consist of four levels followed by a boss fight.

A port of Boogerman to the Sega 32X was once planned[10], but ultimately left undeveloped.

Boogerman re-appeared as a playable character and the rival of Earthworm Jim in Interplay's ClayFighter 63⅓ for the Nintendo 64.

The Mega Drive version of the game was ported to the Nintendo Wii's Virtual Console service by developer M2.

Two of the game's developers, Michael Stragey and Chris Tremmel, would later found developer Toy Ghost. On October 16, 2013, Toy Ghost launched a Kickstarter crowdfunding campaign for a reboot titled Boogerman 20th Anniversary: The Video Game; the campaign failed to reach its funding goal and was unsuccessful. 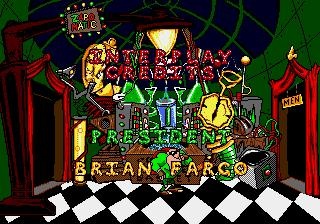 Boogerman: A Pick and Flick Adventure