Raiden Trad, known as Raiden Densetsu (雷電伝説) in Japan, is a 1991 shoot-'em-up published by Micronet for the Sega Mega Drive exclusively in the US and Japan. It is an expanded port of Seibu Kaihatsu's 1990 arcade shoot-'em-up Raiden and the only game in their Raiden series of shoot-'em-ups on a Sega console.

A European release was planned by Ubisoft[9] but it did not materialise.

In the year 2090, a species of alien lifeforms known as the Crystals has invaded Earth. The Crystals took control over most of Earth's military hardware to use in the invasion. In response, the world organization known as Vanquish Crystal Defense (VCD) develops the Fighting Thunder attack craft, a cutting-edge weapon based on Crystal technology. To survive against the invaders and fight back, VCD deploys Fighting Thunder as the only hope for humanity.

The game is a vertically scrolling shoot-'em-up. The player's aircraft is moved in any direction using the D-Pad. It shoots with

. By default, holding down the fire button shoots repeatedly but with a delay between each shot. If rapid-fire is enabled in the options,

fires three shots in a row before a short delay (while

remains unchanged). The ship's primary weapon can be either the Wide Shot, which covers a wider area, or the Laser, a narrow but more powerful shot. The ship can also equip a subweapon, which is fired simultaneously with the primary weapon, by collecting a power-up. The subweapon is either shooting Nuclear Missiles, which deal high damage, or Homing Missiles, which are weaker but seek targets automatically. Collecting the power-up for the currently equipped weapon upgrades it, while collecting the power-up for the other weapon changes to it while keeping the weapon level the same. The ship also has a cache of bombs, which are deployed with

. Bombs are limited in supply and do large area damage and neutralize enemy projectiles.

The ship is destroyed if it collides with an enemy or takes enemy fire. It respawns at a checkpoint with the base weapon, no subweapon, and the initial supply of three bombs if the player has lives left. The game ends if the player runs out of lives, but it can be continued as long as the player has continues remaining. The player can choose from three difficulty levels (Easy, Normal, and Hard) and set the starting number of lives in the options before starting the game.

Items are released by destroying enemies or objects such as crates.

The weapon and subweapon power-ups cycle between the two choices. Collecting the item for a weapon that is already at maximum level awards 5,000 bonus points.

Though other third parties have ported it to various other systems, Mega Drive version was ported by original developer. When played on Normal difficulty level, the game is the closest port of the 16-bit era. The Super NES content has cut content, and the PC Engine version has more colorful graphics but slight changes in stage layout and scrolling speed. Exclusive to the Mega Drive version is a ninth stage simply called "special stage", accessed after clearing the game once. This stage has new graphics and a new boss.

This is a multi-regional release. The title changes depending on the systems country setting. 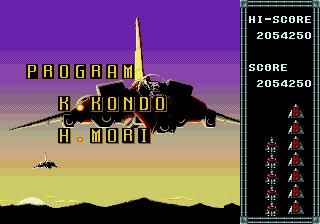