For other games with the same name, see Batman Forever.

Batman Forever (バットマン フォーエヴァー) is a Sega Mega Drive beat-'em-up game developed by Probe Entertainment and Black Team. Based on the titular June 1995 film Batman Forever, it was first released in the United States in September 1995, and was later brought to Europe, Japan, Australia, and Brazil in the following months. Batman Forever is most notable for being significantly inspired by the developer's previous home ports of the Mortal Kombat series, featuring digitized character sprites and a virtually identical control scheme.

Batman, the vigilante alter-ego of billionaire philanthropist Bruce Wayne, must save Gotham City from the dastardly duo of Two-Face and the Riddler. Two-Face is the former Gotham District Attorney Harvey Dent, who was accidentally disfigured in a courtroom incident, which he blames on Batman. The Riddler is disgruntled Wayne Tech employee Edward Nygma, who is angry that Bruce Wayne rejected his invention, a device that beams television signals directly into people's brains. Batman is joined by the young circus acrobat Dick Grayson, whose parents were killed by Two-Face, who takes up the identity Robin.

The normal mode is a side-scrolling beat-'em-up game with controls that are similar to a one-on-one fighting game. It can be played with a single player, where the player can choose to play as Batman or Robin, or with two players, where player one is Batman and player two is Robin. Two-player games can be played cooperatively, where players cannot harm each other and share credits, or competitively, where Batman and Robin can attack each other and have separate credits. Players and enemies have health bars and are defeated when the bar is depleted. Players start each level with the same health as they ended the previous level, but health can be replenished by finding items. Players lose a credit if they run out of life (or the game ends if there are no more credits remaining). Enemies can block or dodge attacks, and most have their own special attacks. Enemies can harm each other with friendly fire. Levels often require the player to defeat all the enemies in an area before pathways are opened. Levels also contain hidden areas that can be found through exploration and the use of items.

and perform a somersault with

. They can glide with their capes, slowing their descent, by pressing

if facing to the left), which lets them reposition to escape surrounds and can also sweep enemies.

jumps off platforms to a lower level.

The attack controls are similar to Mortal Kombat. With a Six Button Control Pad,

is high kick, and

performs a sweep kick, and

blocks, which can be done while crouching. Blocked attacks still inflict a small amount of damage. There are two control methods, selectable before starting the game, for performing back attacks (attacking an enemy behind the character while engaged with another enemy in front of him). The first and default method simply requires pressing in the away direction and attacking. The second method requires holding the  MODE  button and attacking.

With the standard control pad,

if facing left) is high punch,

is low kick, and

performs a sweep kick, and

if facing left) performs a roundhouse.  START  blocks (and  START +

Characters can also grab enemies at close range by pressing

depending on the direction of the enemy). Once an enemy is grabbed, they can be thrown them by pressing in the away direction. Some enemies can block grabs.

Each character carries five "gadgets," which are special abilities that can be performed by pressing certain button combinations. The gadget list is selected by the player at each level, with three standard gadgets for each character and two gadgets selected from two separate lists. There are also four hidden "blueprint" gadgets. Gadgets have unlimited supply and can be used as often as needed.

There is also a fighting game mode called "training mode" where the player can play as Batman, Robin, or many of the enemies found throughout the game against either a computer-controlled opponent, against a second player, or cooperatively against two computer opponents. Batman and Robin choose their gadgets before starting a round, as in the normal game, but the other characters have their own sets of special moves.

Characters always have their standard gadgets. Players choose one optional gadget from each list before each level and then use them by performing the appropriate button combination. Button combinations mostly only use

so they are the same regardless of whether the player has a Six Button Control Pad.

These weapons are hidden and can only be collected by finding all of the blueprints in a level.

The video game adaption of Batman Forever was created simultaneously with the movie, likely as the film was going through its post-production phase. Acclaim's development team in the US were given access to the movie's 70 sets, and would both record footage and take notes of the design before sending it off to the UK-based Probe Entertainment to be implemented in-game[6].

Probe would then attempt to convert what assets they were given into backdrops, initially by scanning the footage into an SGI workstation and then by drawing rough guidelines, placing computer generated light sources and attempting to turn the results into 2D backdrops[7].

The characters in-game were motion captured using the film's stuntmen against green screen, which again would be sent to Probe in video form[8]. No members of the film's main cast reprise their roles for the video game, though their likenesses are used in promotional material.

A limited edition release of Batman Forever was sold exclusively in branches of Woolworths in the United Kingdom. In addition to a boxed version of the game, the package includes a VHS cassette documenting how the game was made, a Batman Forever-themed notepad and stickers. The package is thought to have sold poorly, and has subsequently become a rare collectors' item. Both Mega Drive and Super NES versions were available. 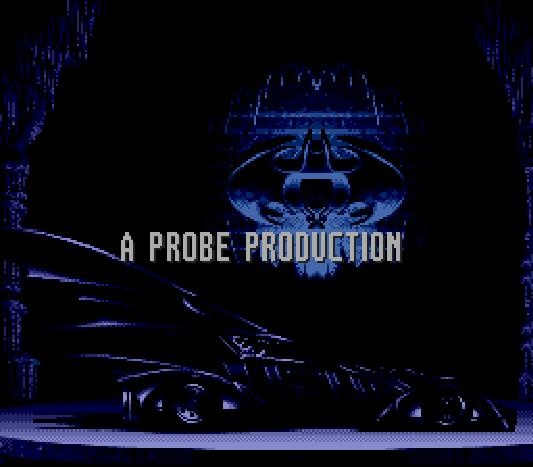