The IBM PC is a range of computers released by IBM over the course of the 1980s. Aimed primarily at business users, the original IBM PC 5150 was an expensive but robust machine designed for text input, however its use off-the-shelf parts and modular design allowed the system to be tailored to a wide variety of needs, including video games.

The IBM PC is one of the most significant computers ever released, as while the design was easily replicated (to the point where IBM had stopped being the biggest supplier of so-called IBM PC compatibles by the mid-1980s), its successes in the business (and later home markets) coupled with the Microsoft operating systems MS-DOS and later Windows, mean it is the ancestor of the vast majority of computers in use today.

Sega Retro classes all "PC" games released for DOS (or as self-boot floppy disks) as "IBM PC" games. Those which require Microsoft Windows to run (i.e. most software after 1995) are classed as "Windows PC" games. 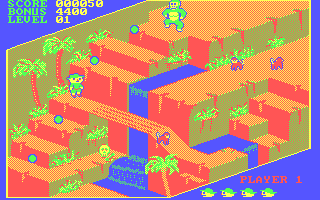 The 4-colour PC port of Congo Bongo was one of the more accurate arcade ports of the time.

For the first few years of its life, the IBM PC was not considered a gaming machine, nor even a product suited for the home. In 1981, graphics cards for the IBM PC were optional, as were colour monitors, and while software was produced to take advantage of both, the PC was not seen as a viable platform for games until at least 1983.

An initial wave of Sega-related PC titles arrived in late 1983 as self-boot floppy disks (that is to say, when placed in the A: drive when the computer is turned on, the game will instantly load without the need for an MS-DOS boot disk). These were designed to take advantage of the only graphics card available for the system at the time - the "color graphics adapter" (CGA) board. Later titles, designed to be booted from MS-DOS, would use the expanded EGA and VGA graphics standards from 1984 and 1987, respectively. Likewise, games initially only made use of the internal one-channel PC speaker, though support for Adlib and SoundBlaster cards (among other standards) would appear after 1987 and 1990, respectively.

The initially high cost of maintaining an IBM PC (in comparison to something more suited for home use such as a Commodore 64) meant that uptake of these new standards was slow, and so backwards compatibility with older cards was often made available in games. However, while the PC became more capable in each passing year, PC games released during the 1980s were generally less advanced than their counterparts on the Amiga and Atari ST. It was not until the release of Intel 486 CPUs and groundbreaking products such as Doom where PC compatibles were considered truly competitive in the gaming market.

Sega did not support the IBM PC directly, instead going through third-party publishers as was the case with other home computers (save for the SC-3000). In the late 1980s, the primary market for IBM PC games was the United States, and so most PC development work occurred stateside. However, many titles were conversions of European-led Amiga and Atari ST ports. Mindscape distributed most Sega PC conversions during this era. With European home computers having priority and IBM versions being produced afterwards, fewer IBM PC ports were made in total, and almost all of them were released after their counterparts in Europe.