Barbie Super Model is a 1993 game for several platforms including the Sega Mega Drive by Hi Tech Expressions tying into the Barbie toy franchise. A Sega Game Gear version was announced at Summer CES 1994,[1] which was later cancelled, and a prototype for that version has been found and dumped.

The goal of the game is to get Barbie around town (by car, on foot, etc.) to prepare outfits for her role as a runway model. At various points (or by collecting various items), you are told to make Barbie look like the picture of a magazine cover, which is made inaccessible to you (making each dress-up a memory game). 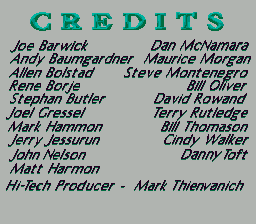