Tomb Raider is a highly successful video game developed by Core Design and published by Eidos in 1996. It was the first in a long line of Tomb Raider games. Victor Soft published the game in Japan, pluralizing the title to Tomb Raiders (トゥームレイダース).

Initially developed with the PlayStation in mind, the game was ported to the Sega Saturn (whose version shipped in Europe six weeks earlier than the PlayStation and PC releases due to a licensing deal with Sega) and PCs, becoming Core's most successful video game project to date and a video game icon.

At the time of release Tomb Raider was considered a revolutionary title, combining platforming, puzzle solving and action sequences together in a 3D environment, something that, until this point, had not been done before. It was often said to be a 3D alternative to Prince of Persia (until, of course, 3D Prince of Persia games were released). Tomb Raider was also notable for starring a female protagonist, Lara Croft.

Tomb Raider was one of the first true 3D titles to be undertaken by Core Design, following a trip to the States in which producer Jeremy Heath-Smith caught wind of Sony's PlayStation console and asked the company to come up with ideas for 3D games. Tomb Raider was put forward by BC Racers animator Toby Gard, who did the bulk of the design work surrounding Lara Croft and her in-game animations.

While Tomb Raider became one of the best selling Saturn games on the market, US Saturn sales were less than a quarter of the PlayStation total[9].

Tomb Raider II was planned for release on the Saturn, but was eventually cancelled for the platform.

With the Saturn's failure to attract the greater market share, development for the sequels were focused on Sony's console, and Lara Croft became an unofficial mascot for the system. The Tomb Raider series would not see a return to Sega platforms until Tomb Raider: The Last Revelation on the Sega Dreamcast.

The original Tomb Raider was re-made in the 2007 release of Lara Croft Tomb Raider: Anniversary.

Despite being the target platform for the game, the Sega Saturn version of Tomb Raider is considered to be the weakest version, primarily due to not being optimized for the way the Saturn hardware handles 3D graphics. On a technical level, the VDP2 is rarely used in the game, with the vast majority of work being handled by the VDP1, thereby using only a fraction of the Saturn's power. The European Saturn version also have minor differences to level layouts (specifically some secret areas) because it was rushed to launch three months before the PlayStation version. This was fixed in the North American and Japanese versions.

The Saturn Tomb Raider runs faster than its PlayStation counterpart in some situations, but while the PlayStation targets and largely maintains a 30 FPS refresh rate, the Saturn struggles to maintain 20 FPS. The Saturn version also lacks reflections on the save crystals as well as alpha transparency.

On the other hand, the PlayStation version lacks perspective correction and has issues with texture warping and polygon seams, whereas the Saturn's forward texture mapping provides some perspective correction, its bilinear approximation reduces texture warping, and higher polygon accuracy results in almost seamless polygons. The Saturn version also has refractive water surfaces, which both the PlayStation and PC versions lack.

Pre-rendered videos are slightly smaller in terms of resolution, although the Saturn's D-Pad is regarded as being more suitable to this game than the PlayStation's. Sound effects are sampled at a lower bit-rate than on the PlayStation too.

Against the PC DOS version, the Saturn (and PlayStation) versions of the game offer more varied music (the PC opting merely for ambiance due to disc space restrictions) and higher colour depth (the PC restricted to 8-bit colour, i.e. a palette of 256 colours, due to the use of a software renderer). The PC version does, however, have the option to run in a 640x480 mode (and a lower 320x200 mode), though in 1996 this was only achievable with high-end hardware. By 1998, PC versions of Tomb Raider had been adapted to multiple 3D graphics cards to address some of these graphical concerns, and fan-made mods allow the game to benefit from modern systems. 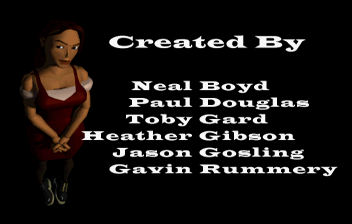 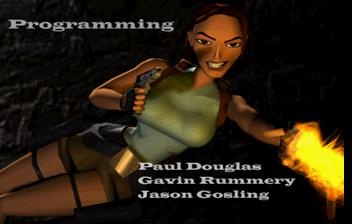