Disney's Aladdin, more commonly known as Aladdin (アラジン), is a platform game developed by Virgin Interactive and released for the Sega Mega Drive in 1993. It is based on the 1992 Disney movie of the same name. The game was also made for the Amiga, Game Boy, IBM PC, NES, and Game Boy Color. It is one of the best-selling Mega Drive games with four million copies sold.[10]

Several different Aladdin games exist. An entirely different game was developed by Sims for the Sega Master System and Sega Game Gear was released around the same period, and another version developed by Capcom was created for the Super NES (and later Game Boy Advance). Capcom's version exists as, at the time, they held the rights to develop Disney-themed games for Nintendo consoles (or more accurately, the SNES).

The game follows the story of the film, which is an adaptation of the story of Aladdin from Arabian Nights. Street urchin Aladdin survives by stealing food from the marketplace in the city of Agrabah. Princess Jasmine, upset at the prospect of an arranged marriage, escapes the palace and meets Aladdin when he saves her from an angry merchant. Meanwhile, Jafar, the Royal Vizier, seeks a magical lamp hidden in the Cave of Wonders. After consulting the Sands of Time, he learns that only Aladdin can enter the cave and retrieve the lamp. Jafar plots to manipulate Aladdin into obtaining the lamp for him.

The game is a side-scrolling platformer in which the player controls Aladdin in stages that follow the plot of the Disney film. The goal of each stage varies: some stages involve collecting Scarab pieces, some only require reaching the end, and some have a boss fight. Aladdin can be moved with

, and can jump with

. He can attack enemies by slashing them at short range using a scimitar with

or by pelting them with apples at long range with

. Apples are a finite resource but can be collected in abundant amounts throughout the game. Aladdin can grab onto ropes, clotheslines, and poles with

. He can climb up ropes with

and descend them with

. He can use his scimitar and throw apples while ducking, jumping, or on ropes. Aladdin slashes four times around himself by pressing

Aside from apples, Aladdin can collect gems, which are traded with the Peddler in some stages for extra lives and "wishes" (continues) by standing in front of the desired item and pressing

. Aladdin can also find Abu and Genie Tokens, which allow him to play a bonus game after the current stage ends.

Aladdin's health is indicated by a trail of smoke emanating from the Genie's lamp on the top-left corner of the screen. The trail shortens whenever Aladdin is harmed by an enemy or a stage hazard. Health can be restored by collecting blue Genie Hearts scattered throughout the stages. If Aladdin runs out of health, the player loses a life. The game ends if the player runs out of lives, but it can be continued if the player has continues remaining. The amount of lives and apples Aladdin is equipped with at the start of the game is determined by the difficulty setting, which can be adjusted in the main menu.

Bonus stages are played after the current stage is completed if the player has collected the appropriate tokens.

In 2019, Aladdin was re-released as part of Disney Classic Games: Aladdin and The Lion King for the PlayStation 4, Xbox One and Nintendo Switch alongside several versions of The Lion King. The compilation includes the original Mega Drive version, along with the June 27th prototype build (named the "Demo Version"), the Japanese version, and a "Final Cut" version which is a modified version of the Mega Drive game with many bug fixes, camera adjustments and other tweaks to improve gameplay, with the goal of representing "potential changes that the development team may have implemented had they had more time". The Game Boy version is also included in monochrome and "colour" (simulating the game as if it were inserted into a Game Boy Color).

Aside from text translations, the game is identical in all regions from a content's point of view. The PAL version, like most other Virgin Games releases, was optimized in terms of music speed but not gameplay speed. Forcing the game into 60Hz mode makes the music play too fast. 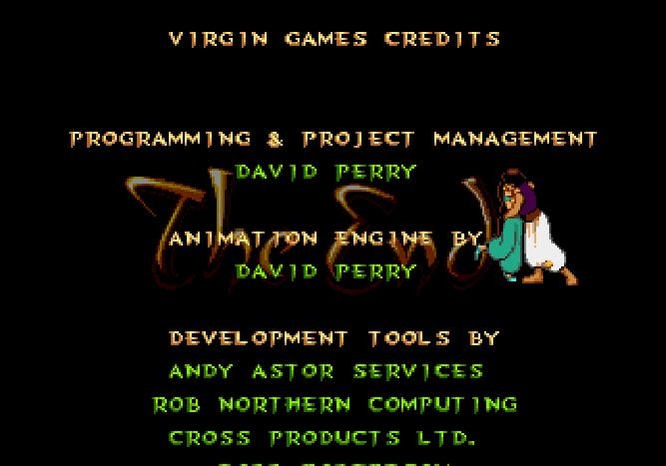