Pocahontas is a side-scrolling action game for the Sega Mega Drive based on the 1995 Disney film with the same name.

The game follows the plot of the film on which it is based, a heavily fictionalized and romanticized version of historical events. It takes place during the early 17th century in what is now Virginia. Pocahontas, the daughter of Chief Powhatan, has been pledged to marry the village's greatest warrior, but she believes her destiny leads her elsewhere. Meanwhile, an expedition led by Governor Ratcliffe is arriving from England in hopes of finding riches to plunder in the New World. Pocahontas meets the English explorer, Captain John Smith, and the two fall in love but find themselves caught between the two factions on the brink of war. The plot is progressed during the game through the stages and cutscenes.

Pocahontas is a cinematic platform game similar to Prince of Persia and Flashback. Pocahontas and her raccoon companion Meeko explore the stages together. The player can control either and switches between them with

. Many puzzles in the game require using both characters to help each other in order to progress (similar to The Lost Vikings). Each character is moved around with

and can jump with

are used to look up and down.

If Pocahontas jumps onto a rock ledge (or presses

while standing next to one if the ledge is at her height), she clings to it and pulls herself up. She crouches with

. She can push and pull boulders, logs, and other objects by positioning herself next to them and pressing

. She can wade through water. Throughout the stages, Pocahontas encounters animals in the forest. If Pocahontas helps the animal or completes a challenge, the animal gives her its spirit, which endows her with new abilities. It is necessary to collect all of the animal spirits except the Fish to complete the game.

Meeko is small and agile. He moves more quickly than Pocahontas. He can also push boulders and other objects. He can collect berries and climb certain trees. He can enter small holes and access areas that Pocahontas cannot. He can jump onto the arms of Pocahontas to reach higher places. He is also able to stand on things that cannot hold Pocahontas, such as lily pads in the water and certain logs. He cannot swim, however. He returns to the nearest surface when he falls in water and is reliant on Pocahontas to help him cross.

Pocahontas has five leaves that represent her health. She loses one leaf if she falls from a great height. She dies instantly if she is attacked by a settler. There are also certain drops that can instantly kill her. She is revived at a checkpoint or the beginning of the level if she dies. The game has no life system, and the player can try again as many times as desired. It is not possible to die as Meeko since high falls do not harm him and settlers ignore him. The hummingbird Flit rescues him if he falls down a bottomless pit. Flit also appears if the player is idle and makes an arrow indicating the direction to travel.

The game has a password system for continuing at the beginning of a stage. 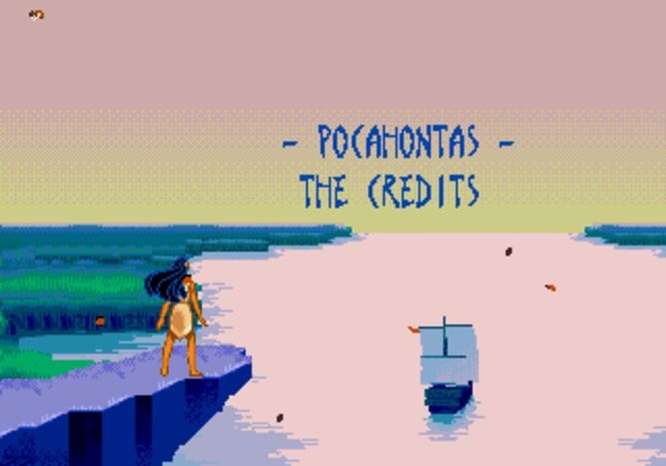 File:Pocahontas MD US VHSAdvert.mp4
Advertisement from A Goofy Movie US VHS

Advert from the magazine Madinat Albat