Pinocchio is a side-scrolling action game for the Sega Mega Drive based on the 1940 Disney film of the same name.

The game follows the story of the film (which is itself based on the 1883 Italian children's novel The Adventures of Pinocchio by Carlo Collodi). An old Italian woodcarver named Geppetto carves a wooden puppet named Pinocchio. The puppet is brought to life by a Blue Fairy, who informs him that he can become a real boy if he proves himself to be brave, truthful, and unselfish. The game uses intertitles between levels to convey the story, in the form of a children's storybook.

The game is a platformer played as Pinocchio. He can move with

. He can perform a spinning kick with

if he finds a red page. He automatically grabs ledges and pulls himself up. Some levels diverge from these controls and play differently.

Similar to previous Disney properties handled by Virgin Interactive Entertainment (Aladdin, The Jungle Book, and The Lion King), animation in Pinocchio was produced by official Disney animators in DisneyWorld, Florida. Virgin would draw the basic concepts of the game in London, which would be sent to Florida for review (often being radically changed in the process) and then sent back, to which Virgin would attempt to recreate the concepts in video game form[3]. The character of Pinocchio has roughly 2,000 frames of animation in total[3].

Twenty-four Virgin staff members worked on Pinocchio[4], using an engine built from the ground up. A Sega 32X version was planned for a simultaneous release[5] (though the Mega Drive version had at least an eight month head start on development[5]), but was cancelled for unknown reasons. Disney prevented Virgin from producing a Sega Saturn conversion due to aspirations of entering the video game market on their own[5]. 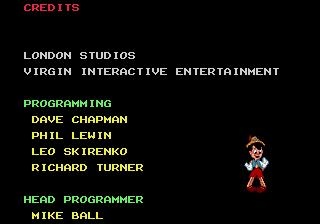