ToeJam & Earl in Panic on Funkotron

ToeJam & Earl in Panic on Funkotron is a Sega Mega Drive action platform game developed by Johnson Voorsanger Productions and published by Sega. Released in 1993, it is the sequel to ToeJam & Earl, and the only game in the series to feature side-scrolling gameplay.

The story takes place immediately after the first ToeJam & Earl game. After ToeJam and Earl had repaired their Righteous Rapmaster Rocketship and escaped Earth, some Earthlings have clung to the outside of the ship on the way home and are now running amok on Funkotron, being a nuisance to the local Funkotronians. Now in deep trouble, ToeJam and Earl must capture the rampant Earthlings in jars and send them back to Earth. In addition, they must also seek out the Funkapotamus, who has retreated to the Funk Dimension because of the Earthlings, to restore Funk to Funkotron.

ToeJam & Earl in Panic on Funkotron is vastly different from other games in the series in that it is a platformer instead of a roguelike. The main objective of the game is to find and capture the Earthlings to send back to Earth and get through each level. The arrow on the HUD will guide the player to the nearest Earthling. To capture Earthlings, the player(s) must throw jars at them - pressing

on its own will throw the jar directly forward, while

will throw a jar upwards in an arc,

will perform a teleport maneuver known as a Funk Move, which can be used to avoid Earthling attacks or to pass through narrow walls, though this requires Funkitude.

By pressing  START , ToeJam and Earl have access to three additional moves by pressing

will activate the Funk Scan, which will view the surroundings through the Funk Dimension and reveal hidden items, Earthlings, traps, Secret Doorways and Funktivate Spots at the cost of some Funkitude. Pressing

will activate the Panic Button if ToeJam and Earl have one, which will make them run around in a panic, making them invincible and making jars fly off in all directions. Pressing

will activate the Funk Vac if ToeJam and Earl have one, which is a powerful vacuum machine that sucks in all nearby Earthlings even if they are hiding. If a player is using a Six Button Control Pad, then they can access these moves without having to pause by pressing

ToeJam and Earl can interact with the environment in many ways, which will often be necessary in searching for Earthlings. Pressing

in front of an object will make ToeJam or Earl interact with it, such as checking bushes, shaking trees, pressing buttons or inserting coins into coin meters. Manholes can be checked by pressing

when above one. Bubbles can be used as platforms, with the player(s) needing to press

to maintain their balance while standing on one.

A Bouncy Fungus can be used like a trampoline. Pressing directions on the D-Pad while in the middle of a bounce will make ToeJam and Earl rotate their bodies, and pressing

when landing on their feet will make them bounce higher. To move off a Bouncy Fungus, HOLD

must be used. If a Bouncy Fungus has a coin meter next to it, then it is a Judging Fungus, which will summon judges if a player puts a coin in. By skillfully perfoming tricks while bouncing on a Judging Fungus, the player will earn bonus points and items, though falling off the Fungus or landing on ToeJam/Earl's head will make the judges leave.

Some levels have bodies of water which ToeJam and Earl can swim in. To swim, a player must repeatedly press

to swim in the direction of the D-Pad. When underwater, a timer appears in the corner of the screen to indicate how much air ToeJam or Earl has - to refill it, the player must swim back up to the surface or swim into a purple puffer fish to give it a kiss and take its air. Going for too long without air will result in drowning.

In addition to Earthlings, ToeJam and Earl will also encounter various Funkotronian locals. They can talk to a Funkotronian by standing in front of them if they are out in the open, or by ringing doorbells with

and waiting if they are inside a house. Peabo, Sharla or Lewanda will have a coin meter next to them, and will invite ToeJam or Earl to Jam Out with them to earn Funk, which involves copying their moves exactly (

for "Clap"). Finding and talking to Trixie, the mermaid Funkotronian, in hidden spots will grant ToeJam and Earl a special power that will last for the remainder of the level.

By talking to the Funkotronians will ToeJam and Earl learn of an optional secondary objective in the game: to lure Lamont, also known as the Funkapotamus, out of the Funk Dimension by looking for his favourite things hidden throughout levels 6 through 15. Depending on how many of Lamont's items are found, the player(s) will get different endings.

The player starts with three lives, and extra lives are awarded for every 10,000 points scored. If ToeJam or Earl run out of health, they die and will use a life to continue the game. If there are no lives left, then they can use up to three Continues to continue the game. If Lil' Kid Mode is turned on in the main menu, then ToeJam and Earl will never die, however the game will end after level 5.

Just like its predecessor, the game can either be played with one or two players. In two-player mode, if ToeJam & Earl wander too far apart, one of them will end up going off the screen, but can teleport to the other player by pressing  START . If ToeJam & Earl face each other and duck with

, they will high-five, causing the player with the most health to give a little to the player with less health. Extra lives are shared between players, and if one player dies, they can use an extra life to rejoin the game if they have at least one.

The HyperFunk Zone is a special area that can be accessed via certain coin meters. Upon entering the HyperFunk Zone, ToeJam or Earl will automatically run forward, and must go as far as possible and collect as many presents as possible. When

are pressed, ToeJam/Earl will turn into a scribble which will allow him to phase through obstacles that would slow him down. Collecting lightning bolts will make him go faster, and collecting clocks will add to the timer. If ToeJam/Earl runs out of time or touches a Vortex, they will leave the HyperFunk Zone.

Johnson Voorsanger Productions had originally begun development on a sequel to ToeJam & Earl that greatly resembled its predecessor, i.e. a top-down action exploration game with proceduraly-generated levels. Sega of America, however, felt a more traditional platformer would better sell the game, and the majority of development work up to that point was scrapped entirely. 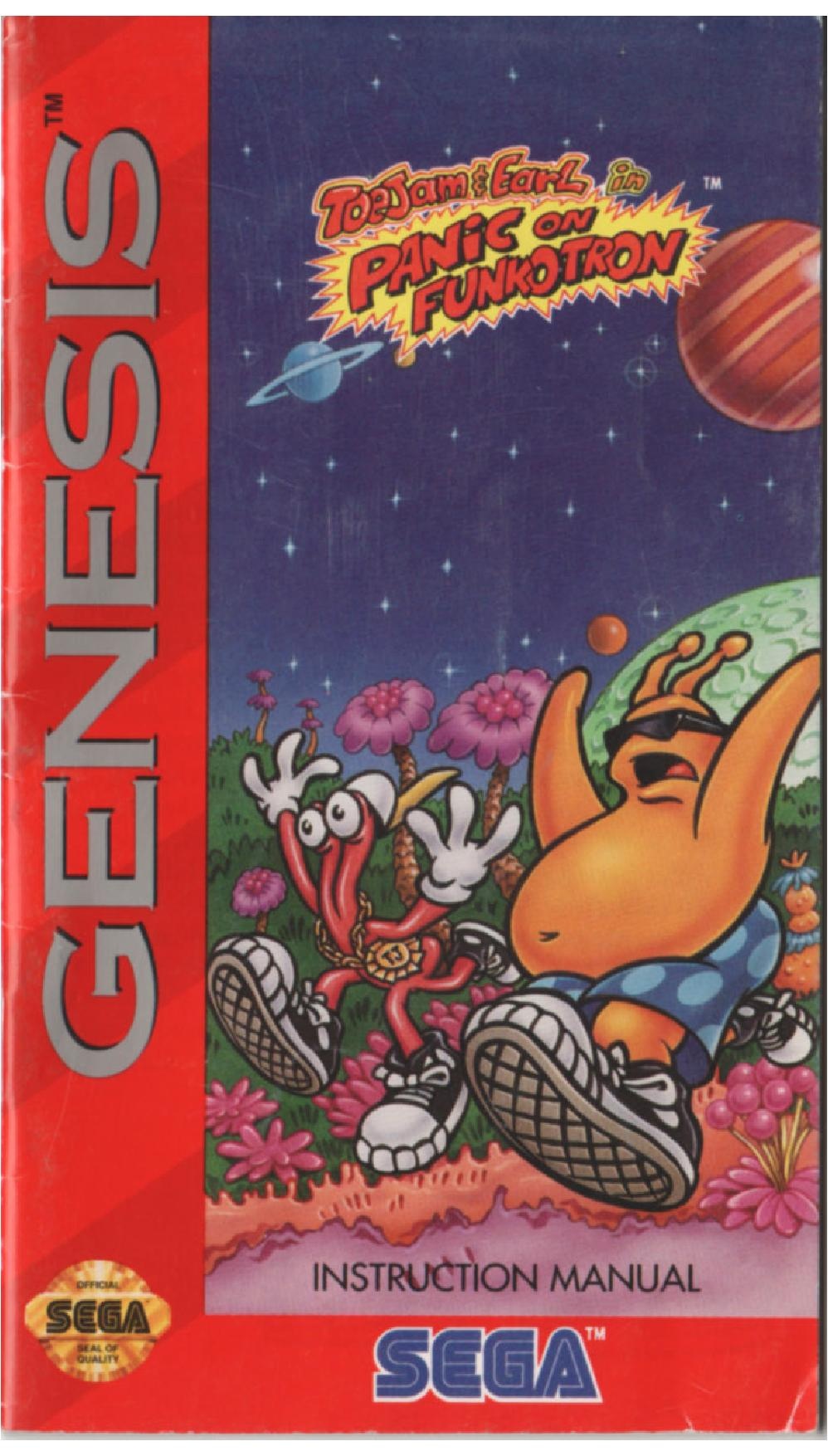 ToeJam & Earl in Panic on Funkotron