For other games with the same name, see Jurassic Park.

The 8-bit version of Jurassic Park (ジュラシック・パーク) is an action game comprised of driving/shooting and platforming segments. It was released for the Sega Master System and Sega Game Gear.

On a small island off the coast of Costa Rica, dinosaurs have been brought back to life for the theme park Jurassic Park. However, the fences that keep the creatures in place have lost power. Dr. Alan Grant has been asked to enter the park and tranquilize the dinosaurs so they can be returned to their areas. 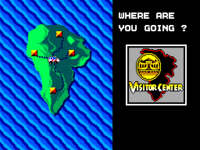 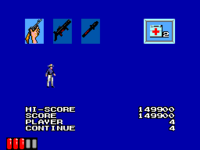 The first segment of each stage is a shooting segment with Dr. Grant in his Jeep. The Jeep drives automatically, and dinosaurs try to attack the vehicle. The player moves a crosshair around with the D-pad and fires with

. The road has rocks that cause the Jeep to bounce upward, which also causes the crosshair to jump. Some dinosaurs drop items that increase the length of Grant's life meter or restore lost points on his life meter. Shooting the Jeep when it hits a rock gives the player an item that restores one life point. The segment ends with a fight against a larger dinosaur.

The rest of the stage is played as a platform game. Dr. Grant is moved around with

in the Master System version or

in the Game Gear version. He crouches with

. He can cling to ceilings and the bottom of platforms by jumping and pressing

and then move along them with

. He can pull himself up a platform when clinging to it this way by pressing

with the jump button. He can also drop down from platforms by pressing

with the jump button. He enters doorways with

Grant is equipped with multiple weapons, which are selected by pausing the game with  PAUSE  on the Master System or  START  on the Game Gear. He fires the weapon with

on the Master System or

on the Game Gear version. He can fire weapons from a crouching position or in midair while jumping. His weapons are a tranquilizer rifle that shoots a tall projectile horizontally, a concussion grenade that shoots at an upward angle and then explodes in the air and hits dinosaurs on the horizontal axis where it explodes, and a fireball grenade that is thrown in an arc and explodes when it hits a dinosaur or the ground.

In both the shooting and platforming sections, Grant's health is indicated by a life meter in the bottom-left of the screen. He loses bars on the meter when he takes damage from dinosaurs or hazards and loses a life when he loses the entire meter. He can restore his life by finding items or by using a First Aid Kit (which can be done through the pause menu, as with changing weapons). If he loses all of his lives, he must use a continue to continue the game. Continues are limited but can be gained by collecting ten Continue Credit items, which are sometimes dropped by dinosaurs when they are defeated.

The first four stages can be played in any order. The player can move the vehicle on the map screen to select any of the four. The player must complete these stages without using a continue in order to unlock the final stage and get the good ending.

The Game Gear version has a completely different sprite from the Master System version for the player character, though the instruction manuals for the game identify the protagonist as Dr. Grant for both versions.