Bug Too!, called Bug Too! Motto Motto Jump Shite, Fundzukechatte, Pecchanko (バグ・トゥー！ もっともっとジャンプして、ふんづけちゃって、ぺっちゃんこ) in Japan, is a sequel to Bug!. It was developed by Realtime Associates and SegaSoft, and was published for the Sega Saturn and PC in 1996 and 1997.

After long negotiations with top Hollywood executives, Bug and his colleagues Maggot Dog and Superfly have just signed a six-picture deal, with all six movies to be filmed in a single day.

Bug Too! is 2.5D platform game that plays similarly to its predecessor but with some additions. Players can now choose from three selectable characters: Bug, his pet Maggot Dog, and the funky Superfly. The game also adds an two-player mode where players alternate playing the game and compete for high scores. The game takes place across six different worlds (represented by parody "movies"), each consisting of two to five levels (called "scenes"). Scenes can now be played in any order, which are selectable from a hub level, with a boss unlocking once every scene has been completed. The goal of each level is to find and jump on the "Bug Stop" at the end. Levels are maze-like and often contain branching paths or require the player to flip a switch or solve a simple puzzle to progress.

Gameplay takes place on track-like floating platforms, with borders around the path indicating edges that cannot be walked or jumped through. Characters walk using the D-Pad and can only move in one direction at a time. They run by holding

while holding a direction. They jump with

and can hover momentarily by holding

while in midair. They duck with

. Enemies are defeated by jumping on them; many enemies require more than one hit to defeat. Characters can find items that give them a ranged spitting attack for the rest of the level, which is performed with

Characters have a health meter depicted as a bottle of "Bug Juice." They can sustain five hits from an enemy or hazard before losing a life, restarting from the beginning of the level or the last checkpoint. They lose a life instantly if they fall into a bottomless pit, if they are crushed, or if they touch lava.

The game has two types of bonus levels.

If the player collects 100 collectibles in every level of the world, the player enters the Flying Bumpercar bonus level after defeating the boss. The player controls the character driving a flying bumpercar. The D-Pad moves in any direction; the vertical controls are inverted so that

There are also bonus levels that can be entered within each level by finding a Coin. These bonus levels vary in gameplay, but the goal of each is to collect as many statues as possible. Every ten statues collected earns an extra life. The bonus level ends if the character takes damage or time runs out.

Similarly to its predecessor, the PC version of Bug Too! sees several cutbacks over the Sega Saturn original, including a drop to 256 colours and missing fogging effects to hide geometry pop-in. Scanlines are added to all full-motion video sequences, presumably to help mask the limited colour palette.

The fog in Weevil Dead 2 is also much more striking, lacking the "texture" of the original game and being both brighter and "thicker", making it harder to see gameplay. Loading times are generally reduced across the board, but more frequent frame rate drops occur even on high-end machines. 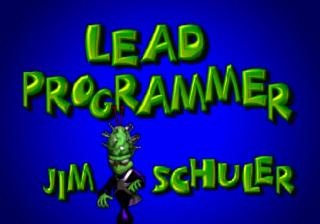 The Sega Saturn version makes use of the Saturn's internal battery back-up to save progress. The game will save when an entire world is cleared.