Hokuto no Ken: Shin Seikimatsu Kyuuseishu Densetsu (北斗の拳 新世紀末救世主伝説 "Fist of the North Star: Legend of the New Century Savior") is an action game developed by Sega for the Sega Mega Drive. It is based on the Japanese manga series Hokuto no Ken as well as a sequel to Hokuto no Ken. It was reskinned and released in some other countries as Last Battle. 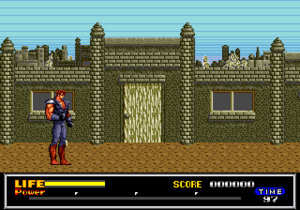 Hokuto no Ken: Shin Seikimatsu Kyuuseishu Densetsu is a side-scrolling action game, where players control Kenshiro across a set of levels punching and kicking enemies. On the Mega Drive,

kicks. Usually the objective is to walk to the right and hit enemies before they hit you, similarly to its predecessor Hokuto no Ken.

Levels are presented in a non-linear order.

The game was poorly received due to the frustating controls, confuse map and lack of explanation of the plot in the dialogues.

The game has been re-released for the Japanese Wii Virtual Console service. It also gained the cult following as a classic kusoge.