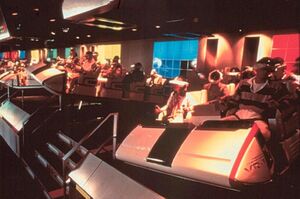 Large attraction is the official categorised name for large-scale indoor amusement rides developed by Sega.[1] For Sega Retro's purposes, these can be considered to be significantly larger and more complex than Sega's mid-size attractions, but smaller than some outdoor rides, such as ferris wheels.

Although Sega's own official definitions for the category are not known, large attractions are currently made exclusively for the large Joypolis indoor theme parks, differentiating them from other amusement venues created by Sega and acting as their central selling points. Many make use of interactive technologies and are built off of pre-existing amusement ride types; for example, the Gekion Live Coaster currently sited at Tokyo Joypolis combines an indoor roller coaster with a rhythm game. Others take on more simple concepts, such as the Fortune Forest fortune-telling rooms.

The attractions are generally designed to be permanent fixtures, often only seeing removals in the event of the closure of their venues or for replacement by a newly-developed example. Like their smaller cousins, they have most usually been developed by Sega AM5, however the manufacturing process of them is sometimes outsourced to other companies. Most large attractions created since the late 1990s have only been released in Asian territories, with some early examples making appearances in the now-closed SegaWorld London and Sega World Sydney parks.

The categorisation was created as part of the Amusement Theme Park concept in 1993, and has not seen as much usage since its discontinuation. It can be extended to include earlier attractions developed by Sega, such as Sega Super Circuit.