Monopoly is a 1992 conversion of the classic Parker Brothers board game Monopoly by Sculptured Software for the Sega Mega Drive. This conversion of the game features an animated board and movement, along with an interactive bartering system, auction system and property management. However, the conversion lacks the ability to set any of the common "house rules" used when playing the board game, a feature added in later recreations of the game. 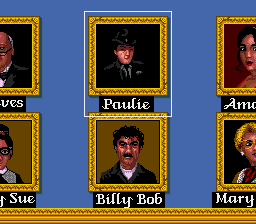 Monopoly is playable by two up to eight players, all of which can be either computer or player-controlled. All the human players can share the same controller if necessary. Each player will be asked to pick from a token: Iron, Shoe, Thimble, Car, Wheelbarrow, Boat, Hat and Dog. It makes no difference which is selected, as the player who starts the game is randomly selected. There are eight computer players who may be selected, all of which have identical abilities and skill: Amanda, Mary Anne, Elizabeth, Gary Cant, Jeeves, Betty Sue, Paulie, and Billy Bob.

After every player has picked a token, a menu will appear asking to either start the game or configure special options. On the options menu, players may assign different amounts of starting money for other players, to balance out skill. Properties may also be assigned to players. Their token may be placed anywhere on the map also. Houses and hotels can also be placed on properties. The Short Game option allows a time limit to be set, where the player with the most money (combined cash and assets) when time expires wins. There are also a number of preset games available for play, though these have a maximum of four players.

A player will randomly be selected to go first. Before a player rolls dice using

, any player may hit

to bring up a list of options. This list will show that players' assets as well as their cash.

From this menu, a player may do many things:

There are 28 properties in Monopoly. Each has a deed which is initially held by the bank. Once purchased via buying or auctioning, the said player assumes control of the property. On land properties, the value of it goes up if there are houses or hotels on it. If a player controls all the properties of any given color, but has no buildings on it, he or she is considered to have a building permit and the standard rent doubles until there is a building placed. 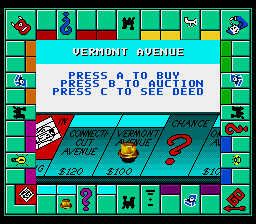 If the player lands on a property, they may elect to buy it for the purchase value. If they do not have enough in cash, other properties may be mortgaged or buildings may be sold in an attempt to get enough money. A player may also elect to auction the property, in which case all players get a chance to bid on it. If the player land on another player's property, they will have to pay them the appropriate rent. The rent level depends on many factors, including the type of property, its location on the board, or how many buildings have been erected on the property.

If unable to pay in cash, a player will have a chance to mortgage properties or sell houses/hotels. If still unable, or just unwilling to do that, a player declares bankruptcy and gives whatever properties she or he had to the player who she or he was eliminated by. If the player was eliminated by something else, all property will be auctioned off. Any mortgaged property obtained through eliminating a player must be un-mortgaged before it may collect rent for its new owner.

Other than properties, there are many other places a player may land with any roll of the dice. Railroads and utilities work like properties in terms of purchase, though have very different ways of collecting rent. Chance and Community Chests are littered throughout the board; both force a player to draw a card which can have either positive or negative consequences. There is also an income tax square, $200 or 10% of the players total worth, including assets. There is also a set fee of $75 as a luxury tax spot on the board.

The corner squares are all unique as well. The starting corner is Go. Anytime a player crosses Go, she or he gets $200 dollars. The next corner clockwise is the Jail. A player passing by is considered just visiting, though players in jail remain there for a while. The Next Corner is Free Parking. In this game, the square is simply a neutral space. The final square is a Go to Jail square. Players going to jail do not collect $200 from passing Go.

A player in jail may post bail by pressing

on their turn when they are in jail, for $50. They may also use a get out of jail free card, provided they have one. Rolling doubles also gets a person out of jail. On the third turn in jail, a player is released and moves the number of squares as rolled on the dice. Another way to go to jail is by rolling doubles three consecutive times. While in jail, a player can not move, but may still do every other action of the game.